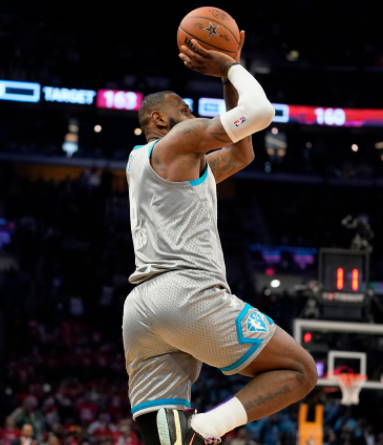 “It was kind of a perfect ending”

Curry secured another 3-point record with the greatest long-distance shooting performance in the history of All-Star Games, while James came through with a turnaround jumper that awarded Team LeBron a 163-160 victory over Team Durant.

Furthermore, Curry had 16 3-pointers and scored 50 points, with two off Anthony Davis’ record - yet failed to make his final attempt beyond the arc that would have enabled him to surpass Davis.

But withTeam LeBronin need of a basket to reach their 163-point target, they knew it wouldn’t serve them well to continue feeding Curry. That’s where James made his next critical move.

As the Cavaliers’best player who led the team to their only NBA championship in 2016, Sunday’s Cleveland All-Star Game was expected to be in favour of James - and while it was Team LeBron that won, there’s no denying co-star Curry also brought the heat in a major way.

“It was kind of a perfect ending,” said Curry, per ESPN’s Dave McMenamin.“Obviously, I got the MVP; I played well the whole night. [LeBron] hit the game winner.

“All the history of our series and the Akron ties, and all that kind of going into how the night went, so it was pretty — can’t really draw it up any other way. It’s right on the nose of how it should go.”

One could definitely make a case for the Ohio City as holding some kind of NBA superstar-originating superpower.

"I mean, Steph, come on, man," said James on Sunday night to reporters.

"This guy is from a different planet. He literally has an automatic sniper connected to his arm. When he lets it go, not only himself, but everybody on the floor, in the stands, on TV, on their phones, whatever you are watching on, you think it’s going in every time. Nine times out of 10 -- and sometimes 10 times out of 10 -- it does go in.

"To be out there and watch that kid from Akron as well shoot the ball the way he shot it, it was unbelievable. It was pretty cool.”