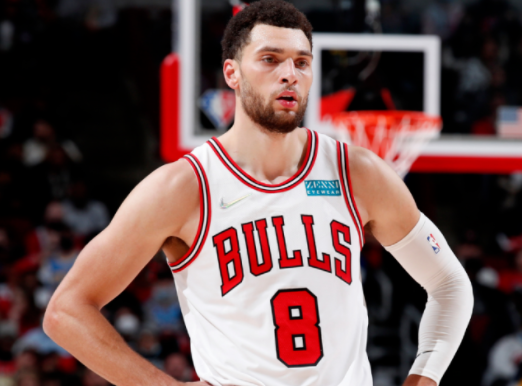 Chicago Bulls guard Zach LaVine had initially been ruled out of playing until sometime later in the week due to an inured left knee.

But after watching the past five matchups helpless from the sidelines, LaVine couldn’t tolerate any more.

"I got tired of just sitting at home watching," said LaVine during a Monday night video call after his return in Chicago’s 111-110 victory over the Oklahoma City Thunder. "I'm about as healthy as I can get. It just sucks sitting at home and not being able to help."

With his last game being on January 14, leaving during the game’s first quarter with some left knee soreness, LaVine shared that he’d been playing through this discomfort for weeks.

But fortunately, an MRI result did not indicate any structural damage, with his knee continuing to recover enough for him to re-join for play on Monday.

"I just didn't want to wait any longer," said LaVine. "I've been working out at home and just this is about as healthy as my knee is going to get. Obviously nothing is structurally wrong like they said. I felt fine; I just got tired of watching the games."

In Monday’s contest, LaVine had 23 points with seven assists and seven rebounds Monday to help his team secure just their third win in the past 10 games.

And while the team welcomed back one star player, they needed to rest another - with DeMar DeRozan ruled out for play in Monday’s matchup. This follows Sunday’s game where DeRozan scored a season-high 41 points.

"With the stretch that we've had with these makeup games and so many games condensed, there would be conversations that we have," explained Bulls coach Billy Donovan before the game. "With DeMar, physically just where he's at, he needs a break here."

Guard Javonte Green had also returned alongside LaVine, with Green not having played since December 31 with an inured groin. And while LaVine was cleared to play his usual workload, playing 35 minutes, coach Donovan placed a 25 minute cap on Green.

Other Bulls who have suffered injuries in recent weeks include guard Alex Caruso who just had a surgery on his right wrist that apparently went well, and guard Lonzo Ball who is scheduled to have surgery on his left knee later on with no exact date yet pinned.

"Everybody deals with it," said LaVine on the Bulls' streak of misfortune with injuries.

"Nobody is going to care. We just learn how to play like this. I'm happy the way these guys have been battling. That's why I wanted to come back and play and do my part as well. Like I said, I can't stand just sitting at home watching knowing I can help."

The Bulls play again on Wednesday facing the Toronto Raptors, with the Thunder facing the Indiana Pacers on Friday.