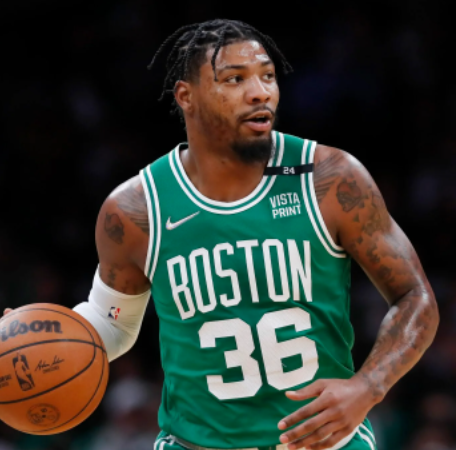 Smart is receiving round-the-clock treatment for his right midfoot sprain.

Boston Celtics guard Marcus Smart is suffering a right midfoot sprain, deeming him “questionable” for the Eastern Conference finals’ Game 1 against the Miami Heat, according to coach Ime Udoka on Monday.

Sources reported to ESPN's Adrian Wojnarowski that Smart had underwent an MRI on his foot Monday that came back clean, and that he will be testing the foot again Tuesday.

"He took a pretty bad fall, got bent up. He has a midfoot sprain, and it's pretty tender and sore right now," shared Udoka during a media teleconference Monday afternoon. "We'll get him round the clock treatment and right now he'll be listed as questionable."

The injury appeared to have occurred when Smart fell over the Milwaukee Bucks’ Giannis Antetokounmpo during the Celtics’ 109-81 victory in Sunday’s Game 7 of the Eastern Conference semifinals.

On the other hand, Boston center Robert Williams III did not play in Sunday’s winning matchup. Udoka had said prior to the game that Williams was available but did not want to disrupt the Al Horford-Grant Williams-Daniel Theis frontcourt rotation that was proving successful over the Bucks.

Udoka also mentioned on Monday that Williams will have no restrictions as they head into the series against Miami, and that it will be easier to integrate him at the beginning of a series vs trying to in the middle of a currently ongoing one.

"Rob is available, just like he was last night. I mentioned he'd be on a needed basis, and he's available, no minutes restriction,” said Udoka.

“I’m always going to be a little bit cautious with guys coming off a layoff without touching the court, but it's a little bit different starting a new series as opposed to being injected into a Game 7 or Game 6 or whatever the case was before. But he's available, looking better every day, and getting more confident in that."

With his contributions, Williams has naturally become a valuable key player for the Celtics this season - playing 61 contests while averaging career-highs of 10 points and 9.6 rebounds per game.

However, Williams did miss the end of the regular season in addition to thestart of the playoffs after undergoing surgery on his left knee - then missing more time against
the Bucks with a bone bruise in that same knee.

With uncertainty still surrounding Smart’s injury, the Celtics will need to continue putting their best foot forward. Fortunately, the team is feeling confident and prepared to take on whatever challenges may come their way.

"It's the playoffs, and I feel like the deeper that you go, it's more intense, it's physical," said Horford.

"Even though the first round was very physical for us, it's not going to be any different. Both teams play hard, but both teams defensively are our tops in the league, or one of the best for sure. So that's what it is at this point. It's just a given that both teams are going to go hard."

Smart’s “questionable” status will be made certain tonight as the Celtics face the Heat in Game 1 of the Eastern Conference Finals.