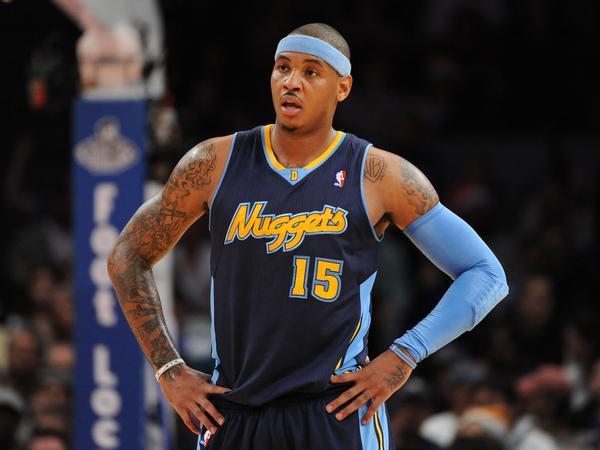 Everybody knows the name Carmelo Anthony. Melo was the 3rd overall pick of the famous 2003 NBA Draft after playing just one season at Syracuse, where he averaged 22.2 points per game and corralled 10.0 boards a game. Cementing himself in Syracuse history as the guy who brought the Orange their first and only NCAA Championship in basketball. Melo then got his number retired by Syracuse. The very rare one and done college legend, Melo doesn’t get enough credit for his historic season at Syracuse. Carmelo then stepped into the high altitude of Denver and scored 21.0 PPG as a 19 year old rookie in the NBA! That was just the beginning of a long and illustrious career that featured: 10 All-Star Appearances, 7 All-League Teams, 12 Monthly Awards, and a Scoring title in the 2012-13 season as he dropped 28.7 points per game. It’s crazy to think that a player like Melo, a shooter of his caliber, a consistent rebounder, a guy that limited his turnovers, just a legend in this great sport of basketball doesn’t even have a job right now. With Carmelo now at 34, he’s eligible for the BIG3, a league that is open to bringing in former NBA greats and helping them regain respect in their sport. Carmelo should be next up for the league, the future Hall of Famer would make the ideal captain of a BIG3 team next season. Hopefully Melo joins this rising league.

Jamal Crawford is another super well known name in the sport of basketball and also one of the biggest names in the Seattle basketball landscape as he runs the Seattle Pro-Am and recently renamed it The CrawsOver. Jamal played in the NBA for 19 seasons and was the 8th pick in the 2000 Draft by the Bulls. Before that, Crawford played at Rainier Beach High School where his number was eventually retired after he led them to a state championship in 1998. He averaged 16.6 PPG and 4.5 APG in his lone season at Michigan. Jamal then began a lengthy NBA career where the crafty scoring guard displayed elite dribble moves, incredible jaw-dropping crossovers and a great three-point shooter— He was a fan favorite for sure who averaged double digit points in 16 seasons! Crawford averaged just over 10 points last season as a 37 year old that came off the bench and played 20.7 minutes a game. The season before that as a 36 year old, Crawford played in all 82 games, averaged 12.3 PPG while playing about 26 minutes a night. Jamal Crawford is an ageless wonder. No other way to describe it. A three time Sixth Man of the Year, the 2017-18 Teammate of the Year and one of the most well respected players in this sport, Jamal Crawford should be playing BIG3 basketball in the 2020 season. It’d be amazing if Jamal could team up with Nate Robinson, another Seattle native as the two are really good friends and it’d be so fun to see them play together.

Next up is another huge name in the Seattle basketball scene. Tony Wroten. Tony played at Garfield High School as a two-sport athlete (basketball/football) and absolutely balled out as a basketball player. Tony worked his way into being a top 15 recruit and chose to stay home and play for Washington. Tony played just one season at UDub, playing in 35 games and starting 27 of them. He averaged 16.0 PPG, 5.0 RPG, 3.7 APG, and 1.9 SPG. There’s a reason Wroten was named the PAC-12 Rookie of the Year, a member of the PAC-12 All-Freshman team and the All Pac-12 1st team. He was then drafted 25th overall by the Grizzlies in the 2012 Draft. Just a year later he was traded to the 76ers and this is where fans fell in love with Tony Wroten. The lefty recorded a triple-double in his first career start becoming the first player to ever record a triple-double in their first game. Tony was playing for the “Process Sixers,” an organization that was perfectly fine with tanking and throwing out a mediocre roster game after game. Well, they had a star in Tony Wroten and didn’t realize it. Tony averaged 13.8 PPG, 3.6 APG, 3.0 RPG, and 1.2 SPG during his time in Philly. Unfortunately, during his time in Philadelphia, Wroten tore his ACL, and he was never looked at as the same player again. He bounced around multiple organizations before being forced into the G-League and eventually overseas. I still think Wroten can play, he’s going to turn 27 next April and become eligible for BIG3 play. The best version of Tony Wroten featured a hard working, fearless, athletic, crafty, guard that just wanted to put on a show for the suffering 76ers fans. I’d love to see Wroten participate in this BIG3 next year. He and Nate Robinson are cousins, could these two play on the same team next year? Possibly a team consisting of Nate Robinson, Jamal Crawford, and Nate Robinson... Or would we get to see 1 on 1 battles between these three familiar faces. Hopefully we find out!

Here is a super under the radar pick. Eric Griffin is virtually unknown having played at Campbell from 2010-2012, where he averaged 14.5 PPG and 8.6 RPG, making 55.9% of his field goal attempts. Before that, Griffin played at two separate community colleges. Griffin has been grinding his entire life to play the game of basketball, and make a name for himself. He’s played professionally since 2012, having been with 10+ teams overseas, and has had multiple stints in the G-League. Several NBA teams have signed him but never gave him the opportunity to play in a regular season game. Eric’s G-League totals are great as in just two season he has posted the following numbers: 18.6 PPG, 6.2 RPG, 2.2 BPG. Griffin is 6’8”, an athletic forward that throws down ferocious dunks, can sky up for any rebound, defend at a good level, and is an incredible athlete. Unfortunately, NBA and G-League teams will shy away from letting Griffin play for them in the near future as the 28 year old was wrongly arrested for attempted murder. A crime he didn’t commit. I say the BIG3 should invite Eric Griffin to their league with open arms and help turn this guys life around. To be put in jail for a crime you didn’t commit after working your whole life to make it to the NBA and that dream just got shattered because of a mistake? That’s not right. Here’s to hoping Eric Griffin can showcase his skills in the BIG3 next season.