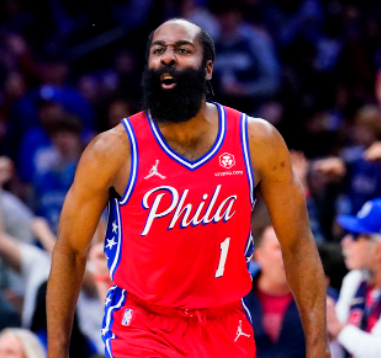 “We're getting more confident as the series goes on.”

Following their two lost games in Miami, James Harden put out his best performance yet with the Philadelphia 76ers in Sunday night’s Game 4 to lead the team to a 116-108 win over the Miami Heat.

Harden totalled 31points which included 16 in the fourth quarter, as well as hitting six 3-pointers, which marked his highest since arriving to Philadelphia three months prior. He also had seven rebounds, nine assists in six turnovers in 41 minutes.

Now, the series sits at a 2-2 tie as the team heads back to Miami for Game 5 on Tuesday night.

"We're getting more confident as the series goes on," Harden said. "Those first two games [were] a blur. But obviously, having Joel and having our full team, we kind of know what to expect.

"We know where to execute on both ends of the ball. It just makes the job a lot easier. Think about: We're still a fairly new team. We're damn near two months. So when we finally catch a rhythm and finally find something that works, Joel goes off for a couple games.”

Joel Embiid, who had made his return in Game 3 after being out with a facial fracture and concussion for the series’ first two matchups, had 24 points, 11 rebounds, and two assists for the Sixers on Sunday night.

"So we're finally settling into the series, and we've had some great things that have worked tonight and that we can capitalize off in Game 5”, Harden said.

It seems that the very thing the Sixers benefit from doing differently is to simply make shots - and Harden delivered on this in Game 4, hitting his four triples in the final quarter alone to help secure their win over the Heat.

"I just took what the defense gave me," said Harden. "Same shots, just made some. Nothing really changed, man. I made some shots. That's I mean, obviously that's a game changer. But [I was] just being aggressive."

This very aggression wasn’t lost on fans and spectators, with Harden’s 18 overall shot attempts and 10 3-point attempts both marked as the second-most he's had with Philadelphia.

"We need him to be aggressive," said Sixers forward Tobias Harris.

"But he does a great job of evaluating the game, [finding] where he can make plays where he can take shots. Tonight, he got going. You're just seeing the confidence in him getting downhill, and then the three ball opening up for him.

"What we really need him to do on a nightly basis is what he does. Just be solid for us and be able to really pick apart the defense, and how they're playing him. He sees so many defensive coverages out there on floor. A lot of times they zone up the court as well, so sometimes it's tough for him to be extremely aggressive on the offensive end.

“But when he's in a groove like that, we just get him the ball and keep it going."

Will Harden continue to play aggressive, and will the Sixers keep up that same level of confidence needed for a Game 5 win?Tuesday night couldn’t come any sooner.