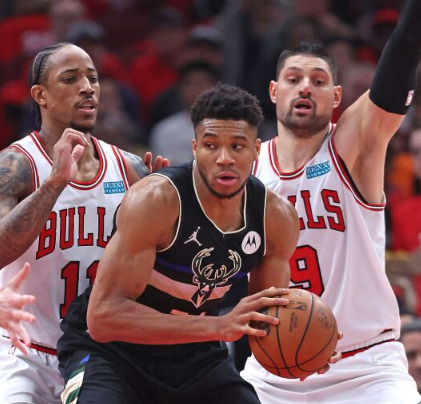 "We gotta keep up our defense."

The Milwaukee Bucks are now just one win away from advancing to the second round of the playoffs after they routed the Chicago Bulls 119-95 in Sunday’s Game 4 - taking a 3-1 lead in their first-round series.

This victory follows Wednesday’s Bulls win in Game 3, which saw DeMar DeRozan set a playoff career high with 41 points on 16-for-31 shooting, helping lead Chicago to a 114-110 win that then evened the series at 1-1.

After some atypical poor shot performances in Games 1 and 2, DeRozan made a promise that he wouldn’t be letting that happen again moving forward.

"I looked at all my missed shots from Game 1, most of them shots are my shots," said DeRozan following Wednesday’s game.

"I'll never let a miss deter me from taking my next jump shot. And not being aggressive. I just knew [a bad shooting night], it wasn't gonna happen."

Setting a career high in scoring during his initial season with the Bulls, DeRozan became just the fifth player in league history to score 40 points during a playoff game - as well as the first since Derrick Rose set the mark back in 2011.

But while Sunday’s Game 4 saw the Bulls with an even stronger start off than in Game 3, DeRozan and the team weren’t able to sustain that edge.

This time, Chicago’s DeRozan scored just 23 points, while Giannis Antetokounmpo led the Bucks to their win with 32 points and had seven assists, with reserve guard Grayson Allen coming off the bench for the second-straight contest with 27 points.

Regarding what the Bucks will need to do moving into Game 5 to close out the series, Antetokounmpo commented, "We gotta keep up our defense."

“There were times where we gave really, really good effort and they still scored," said Bulls coach Billy Donovan.

"I think there were times we moved the ball and generated pretty good looks for each other and the ball didn't go in the basket. That, I think, gets deflating. And you could kind of sense that a little bit.”

The Bulls and Bucks go head-to-head again in Game 5 this Wednesday at Chicago.