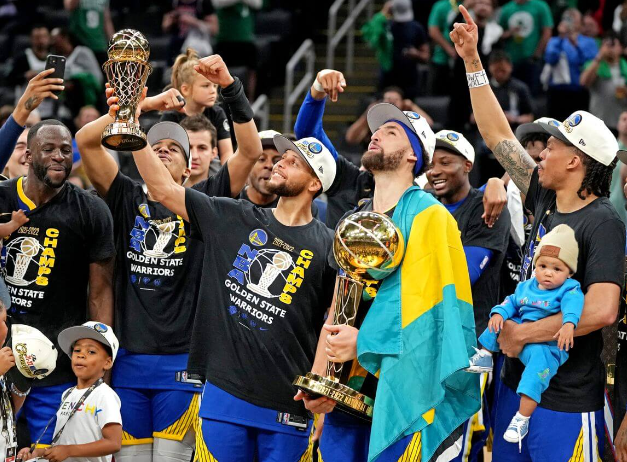 And so they’ve done it again: the Golden State Warriors routed the Boston Celtics last week to win their fourth NBA Championship title since 2015.

Home fans, who waited patiently for the team’s arrival, joined the Warriors with a celebratory parade that traveled a 1.4-mile stretch of Market Street in none other than the Golden City, San Francisco.

"We represent you guys," Curry told the small audience composed of team and arena staff at the pre-parade rally.

"The life that you give us, the inspiration, all those things matter. That's what it's all about. Entertaining you guys, giving you something to cheer for, be passionate about. It's giving us the platform to go do things that haven't been done before in history and representing the entire Bay Area in the process.

“We're back, having a parade in San Francisco, so let's go do it."

At the parade, "M-V-P!" chants filled the air as blue and gold confetti poured down from the sky. Ayesha Curry popped a champagne bottle and showered her husband. Curry and Damion Lee then popped a bottle of their own to spray fans standing before them.

Thompson ran off with the Larry O'Brien Trophy whilst high-fiving and dancing with fans.

Jordan Poole, a few double-decker buses trailing, drenched the crowd with a Super Soaker water gun while documenting the fun for himself.

Wiggins, who was paired up with him on the same bus, sprayed more champagne on everyone after snagging a bottle from a fan and shaking it up. Payton II walked most of the way and was shirtless, staying true to his promise to "go full JR Smith”.

While the Championship-style celebration wouldn’t be the first of its kind for Golden State veterans like Stephen Curry, Draymond Green and Klay Thompson, it would be for younger Warriors like Jordan Poole, Andrew Wiggins and. Gary Payton II.

"What brings me the most joy ... is seeing the guys who won it the first time,” said Green.

"In your journey, you always want that first-time feeling back. The reality is you never get it again, and the only way to get it again is to feel it through Andrew Wiggins, Jordan Poole, Otto Porter, Beli, Moses, GP ... you feel it through those guys and that's how you get that sensation again."

Crowds at the Warriors Championship parade could not be contained, and barriers were violated. But it didn’t seem to matter - as a true celebration knows no bounds.

"This has been an amazing year," said Green. "I told y'all, don't let us win a f---ing championship, and clearly, nobody could stop it."