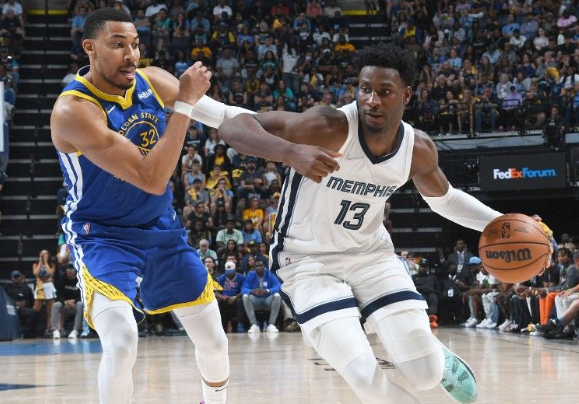 The Memphis Grizzlies deterred elimination on Wednesday night with the highest-scoring performance in the team’s postseason history - routing the Golden State Warriors a whopping 134-95.

The victory was much needed to force a sixth game in the Grizzlies’ Western Conference semifinal.

“We’ve exceeded expectations ever since I’ve been here,” said Desmond Bane, who scored 21 points along with teammates Jaren Jackson Jr. and Tyus Jones (also scoring 21 each).

“It almost seems whenever someone thinks we can’t do something, we end up doing it. So I never want to put a limit on this team on what we can do because anything's possible.”

Forward Dillon Brooks also added 12 points for the Grizzlies, with Ziaire Williams and Brandon Clarke each finishing with 11 points and De’Anthony Melton finishing with 10. Steven Adams had 13 rebounds and six offenses.

Injured with a right knee bone bruise, Memphis’ All-Star guard Ja Morant cheered enthusiastically from the bench - with a “Grizz in seven!” chant that gained momentum among his teammates.

"I would say we are energized," said Dillon Brooks. "We're locked in, and we're all eyes on Game 6. Try to keep surviving."

The Grizzlies were truly a sight to witness in Game 5 - making franchise history by scoring 77 points in the first half alone.

“We knew what was at stake,” said Jackson. "We didn’t change anything, though. We just calmed down, looked at the film, understand what we had to take away from the last game and just went out there and executed.”

Wednesday’s game marked the first loss for Golden State that had Mike Brown filling in for a Covid-positive tested coach Steve Kerr.

"It was awful," said Warriors guard Klay Thompson, who did not expect things to pan out the way they did for his strong team.

"It was embarrassing. From the opening tip, they had great flow, and they were more aggressive than us. ... We all had the mindset that we were going to close it out tonight, but sometimes basketball [isn't] an exact science, and we played like a shell of ourselves."

Teammate Draymond Green, on the other hand,commented about how he doesn't understandthose who are only enthusiastic when they win.

The teams face off again in Game 6 on Friday night in San Francisco - where Golden State has won five consecutive playoff games, in addition to their last seven overall.