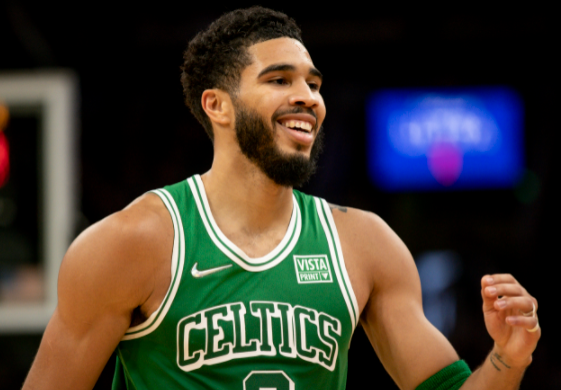 “He takes pride in the matchup going against high-level opponents”.

Jayson Tatum scored a season-high 54 points to lead the Boston Celtics past the Brooklyn Nets 126-120 on Sunday. The victory marked the Celtics’ fifth win of their last six games, and 21st win of their last 27 games.

Celtics coach Ime Udoka told reporters that he had told Tatum to “take the alpha approach”, and to “be best guy on the court each night.”

“He takes pride in the matchup going against high-level opponents.”, Udoka said of Tatum, who couldn’t be stopped by Brooklyn greats like Kevin Durant and Kyrie Irving in Sunday’s contest.

Durant was playing in his second game since mid-January, finishing with 37 points for the Nets while also becoming the 23rd player in the history of the NBA to attain 25,000 points.

Irving joined Durant on the court for only the fourth time this season, scoring 19 points in his first game in three weeks, and his first Boston game since being pelted with a water bottle in last year’s playoffs.

“Those matchups — when you're playing one of the better teams in the league, two of the best guys — as a competitor, those are the kinds of moments that as a kid you looked forward to,” Tatum shared. “When those opportunities come, you try to make the most of it.”

In the game’s second half, Tatum scored 34 points for the Celtics, with teammate Jaylen Brown scoring 21 points.

Brown, finally having been cleared to return after testing his injured ankle before the game, beat the 24-second clock to make a 3-pointer that gave Boston a 121-115 lead with 40 seconds remaining.

Having played a season at Duke prior to Boston drafting him No.3 overall in 2017, Tatum said that he considered attending Blue Devils coach Mike Krzyzewski’s final home game Saturday night, which resulted in a 94-81 loss to North Carolina.

However, due to the Celtics’ 1pm start on Sunday posing an obstacle, he couldn’t attend.

“I definitely wish I could have been there, for the last game. It was an incredible run, 42 years, everything he’s accomplished at Cameron Indoor Stadium”, Tatum told a reporter who went to California - with Brown, who had also went to California, at his side. “Definitely a better atmosphere than Cal.”

“Tonight this man to the left was unstoppable,” said brown of Tatum. “I think that helps.”

The Celtics play again on Wednesday against Charlotte Hornets, with the Nets facing the Hornets on Tuesday.