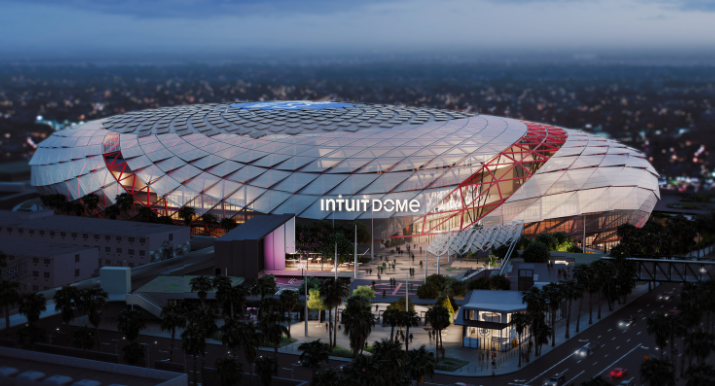 Los Angeles Clippers chairman Steve Ballmer wanted his team to build an arena of their own in order to support the Clippers “identity” - and he’s made that dream a reality.

After sharing the Staples Center with the Los Angeles Lakers, the Clippers will now have their own state-of-the-art arena in Inglewood named the Intuit Dome - purchased last year by Ballmer from New York Knicks owner James Dolan's The Madison Square Garden Company for a hefty $400 million in cash.

"We needed to say, 'We're our own guys. We don't play in the same place as the other guys. We're going to have our own identity,'" Ballmer told ESPN.

The Clippers’ new home is estimated by Ballmer to cost him upward of $2 billion - which is essentially the same price he paid for the Clippers franchise seven years ago.

"I've never been in a place where you had two teams in a town," said Ballmer. "I grew up in Detroit. Everybody's a Pistons fan. And I think for enough years the Clippers were bad enough, everybody could just ignore the Clippers.

"There's 30 teams in the league. There's 29 others. And we got one that happens to be based in L.A. And we got our fans. We use our expression, 'LA Our Way.' And we're building our own presence, identity. And if the other guys feel a little threatened -- the other guys' fans, I mean; the players are actually a little different deal -- but if they feel a little threatened, that's OK. It means we're doing good."

Ballmer explained that he had spent years traveling the country to study stadiums and arenas, and drew inspiration from locations such as the student section at Duke - which will be apparent at the Intuit Dome in a section of 51 seamless rows of the stadium called "The Wall”, in addition to inspiration from the slope of Utah's Vivint Arena and end zone suites at football stadiums.

Furthermore, Ballmer wanted the design to be conducive to fans sitting in their seats to be present for the game - so to reduce the time fans would be away from their seats, the new arena will feature more legroom than any other NBA arena, as well as double the number of toilets and zero checkout lines at concession stands with an online ordering model.

"I feed off of the energy in the building," shared Ballmer. "But people go away and they get late to games or they don't get back from halftime. I really want to make sure people are in their seats so ... that energy, we feed off of it."