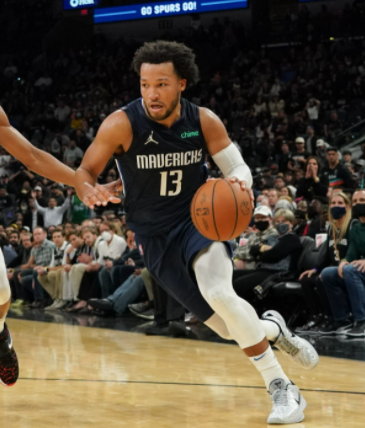 The Dallas Mavericks took down the San Antonio Spurs by just a single point in Wednesday night’s stressful and dangerously close 109-108 contest.

For the Mavericks, superstars Jalen Brunson had 31 points and 10 rebounds, and Luka Donic had 23 points and 12 rebounds to really lock in the win.

Dallas had just come off of a 125-110 loss to the Miami Heat the day prior - so the team did well to dodge its third loss in four by outscoring the Spurs just in the final quarter.

“You can always use the excuse that you’re tired,” said Brunson.

For the Spurs (who have lost six of seven games since a victorious season opener), Dejounte Murray had 23 points and Devin Vassell had a season-high 21.

“Being able to play with pace, getting into the offense a little bit quicker gave us the advantage,” shared Mavericks coach Jason Kidd. “On a back-to-back, sometimes that’s hard to do, but I thought the guys looked to score after the steal.”

Brunson gave the Mavericks a 101-96 lead with 3 minutes left when he scored five points in just 32 seconds which included an impressive three-pointer.

After San Antonio closed to 103-102, Brunson took those final 30 seconds to hit a step-back, 13-foot jumper and two free throws.

“He did amazing,” said Mavericks center Boban Marjanovic of Brunson.

“Seemed I think everybody did a great, great job. We played last night and we were (gasping) like tough game, fighting.”

“Brunson was a killer again,” he said. “In both games, he was the difference. He plays really smart, is a tough kid, he is skilled, and in the fourth quarter, he got us both times.”

The Mavericks play again on Saturday vs the Boston Celtics, with the Spurs playing Friday vs the Orlando Magic.

Let’s see if Dallas can lead a win streak this time.