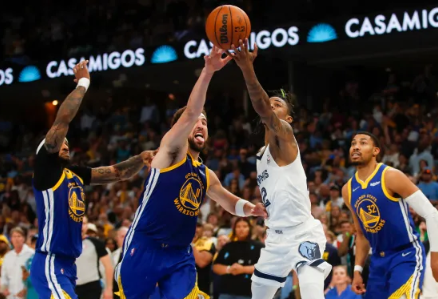 “We can beat this team if we play to the standards and capabilities that we are capable of.”

While the Memphis Grizzlies may have lost their home-court advantage, they say that they haven’t lost any confidence following their Game 1 defeat against the Golden State Warriors.

Now, it’s up to the team to bring that same game-winning performance as they go on to try and even the series against Golden State tonight (Tuesday) in Game 2.

"[Losing Game 1 two weeks ago] taught us that it is a long series," said point guard Tyus Jones on Monday. "Not to weigh too much on one game but also to correct things quickly. You got to learn from [the Game 1 loss]. It doesn't mean the series is over."

It’s worth considering that even with Memphis finishing strong with 56 wins alongside the second-best record in the league this season, Golden State and its superstar roster have an undeniable competency for playoff wins and championship titles.

Coming into the series, the Warriors had combined to play 670 career playoff contests with the Grizzlies having only 198 (ESPN Stats & Information).

"What, are we not supposed to show up tomorrow?" responded forward Kyle Anderson when asked about Golden State’s major playoff experience advantage. "We don't really pay attention to that. We are trying to win the series."

Following their 130-117 loss to the Timberwolves on Sunday, the Grizzlies carried on with their same routine - closely watching the play back for areas of improvement and adjustment.

Perhaps the team’s betterment approach did well to get them a 28-point lead win in Game 2.

"The obvious thing to notice is how tough-minded they are," said Golden State coach Steve Kerr. "Two of those four [wins], maybe three of the four, they were down double figures in the fourth quarter."

"They are a young, up-and-coming team. Great athleticism. Taylor [Jenkins] does an amazing job with them. They are deep ... we have been through this before. You win one game, you move on to the next one."

If one thing’s for sure, it’s that the Grizzlies seem to have the right attitude and mindset moving forward into tonight’s Game 2.

"A lot of confidence," said Jenkins regarding what he sensed from Memphis on Monday. "A lot of encouragement. I told the guys I am super excited we lost by one. We did some good things and we did some things that are definitely within our control that we can do a whole lot better.

"And we have responded all season long. We responded last series. Obviously a different level of playoffs now in the second round, but our guys have always shown that ability to turn that page, get better, understand where we need to be pissed off.

“But also encouraged that we played super hard, lost by one. We can beat this team if we play to the standards and capabilities that we are capable of."