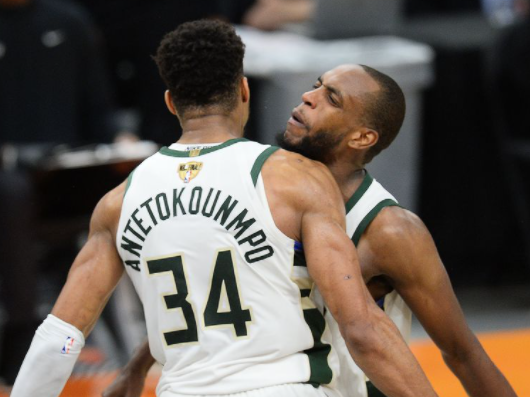 Jrue Holiday’s perfect clutch steal and alley-oop pass in the game’s final seconds was just what the doctor ordered.

In the last 30 seconds of the NBA Finals’ Game 5, it seemed as though the 1-point-trailing Phoenix Suns could turn the tables back in their favour - with all eyes on Devin Booker to give them the push they needed.

That was, until the Milwaukee Bucks’ Jrue Holiday appeared out of no where - capturing the ball in the air as Booker retracted toward the middle of the court..

"I was just trying to score the ball," said Booker. "[Holiday] was behind me. I turned and he was right there."

"I guess I was just in the right place at the right time," said Holiday, who finished the game with 27 total points an 13 assists.

After he secured the ball with just 16.7 seconds remaining, Holiday carried out a flawless alley-oop pass to Giannis Antetokounmpo for a strong dunk and a foul.

"The pass was all about trust," shared Antetokounmpo. "Obviously, he could have pulled the ball out, let the clock run and get a good shot. But he trusted me, threw the ball out there, and we were able to get a bucket."

Then, in just under four seconds, the Bucks took back their power - prevailing over Phoenix for a 123-119 victory that would push them to within one win of their first championship in 50 years.

"Going home to our fans, going home to Milwaukee is a great opportunity for us," said Bucks coach Mike Budenholzer.

"But you have to go out and play. It's at this point, you could feel it tonight, the high-level basketball on both sides of it.

“But to be going home to our fans, Fiserv has been rocking. It's been huge for us, and we're excited about our opportunity in Game 6."

The highly anticipated Game 6 will be Tuesday night at the Bucks’ home, Fisery Forum.

"I feel like now, you've got to give it your all," said Holiday. "We're literally coming down to the last game, game or two.

"At this point, there's no excuses."