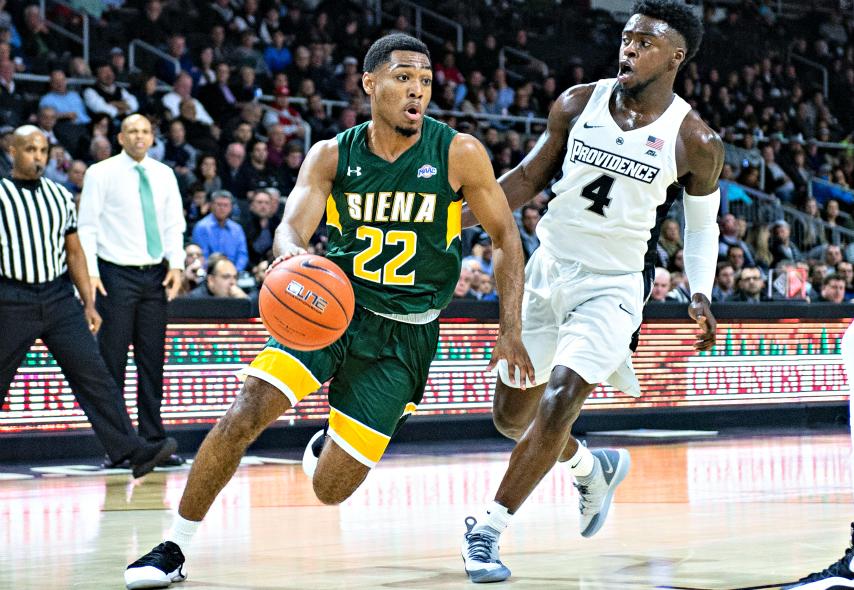 Jalen Pickett, 6 foot 4, point guard. Jalen is from Rochester, New York and is a player who was severely under-recruited. He chose to play at Siena over fellow MAAC schools, Canisius and St. Peter’s. I’d say Jalen made the correct pick here, he just finished his freshman season and is easily the most decorated freshman in the history of Siena basketball. He was named to the All-MAAC 1st team, MAAC All-Freshman team, All-MAAC Tournament 1st team, and was named the MAAC Rookie of the Year.

So what did Pickett do in his freshman season that made him so special? Simply put… Everything. Scoring, passing, rebounding, defense, elite vision on both sides of the ball, and unselfishness. His style of play is rare, slow and methodical, but the results really, really show. There’s really one guy that his game will remind you of and it’s Magic Johnson. I didn’t say Jalen is as good as Magic was! I’m saying his game is so reminiscent of Magic’s game. Just go watch some of the highlight videos on YouTube and see if you see what I see! Let’s look at some numbers now, he played in 33 games and started 32 of them, the lone game he didn’t start was Senior Night and he still put up 11 points, 10 assists, and 8 rebounds. For the season he averaged the following: 15.8 PPG, 6.7 APG, 4.6 RPG, 2.0 SPG, 43.7% FG%, 50.9% on 2’s, amd 34.8% from three. He also played 37.1 minutes per game as a freshman, that’s rare, super rare. Jalen started the year on a shaky note, shooting 2/11 against Providence but he tossed out 9 assists, he then fought back and scored 19 on 5/12 shooting, 4/9 from three as Siena won at George Washington. Jalen added 6 assists and 5 rebounds that day. A three game stretch late November is when I found out about Jalen Pickett. Sure his team lost all three games, but Jalen went off. Lehigh was the first victim, 25 points, 9 assists, 6 rebounds, 3 steals. 10/19 from the field, 4/8 from beyond the arc. How do you follow that up? Colgate and Jordan Burns were next, Jalen goes for 21 points, 9 assists, 5 rebounds, 7 steals, and 2 blocks. Ok, ok… How do you follow that up??? Hofstra and Justin Wright-Foreman found out… Pickett goes for 27 points, 13 assists, 5 rebounds, and 2 steals. Only shot 9/12 from the field that day, not too shabby eh? In those three games he averaged 24.3 PPG, 9.7 APG, 5.3 RPG, 4.0 SPG, and shot 59.6% from the field. Like, I mean, that’s NUTS. I can’t go and talk about every game, the ups and downs, etc, so I’m just going to link his game logs page here and talk about one more spectacular performance. https://www.sports-reference.com/cbb/players/jalen-pickett-1/gamelog/2019 Alright, the date was February, 17th, 2019. Jalen Pickett went head to head with Cameron Young who eventually won the 2018-19 MAAC Player of the Year over Mr. Pickett. This was their lone matchup of the season, it might have been the greatest head to head performance of the entire season. The one issue? The game was on ESPN3 so hardly anybody watched this, but I did and the box score/stats don’t do this battle justice. Quinnipiac won 107-100 in triple OT, Cameron Young scored 55, he was 9-13 from three, big ups to Cameron he’s super talented but this is about Jalen Pickett’s day. Jalen brought Siena back from 20 down with 12:55 to go in regulation. How, like you literally have to be perfect to mount a comeback like that. So Jalen compiled this statline, 46 points, 13 assists, 4 rebounds, 4 steals, shot 14/26, was 4/8 from three. But what’s the most impressive stat? 1 turnover. ONE TURNOVER in 53 minutes played! Let that sink in. All the possessions of a 107-100 30T game, all the times Jalen had the ball as PG, all the passes made, all the double teams. One turnover. So, so impressive.

When I wrote my article last year about Ja Morant, I was so impressed with all the numbers he put up, the stuffing of the stat sheet. Jalen plays at a smaller school than Ja, a school that most likely won’t see a nationally televised game until their conference tournament, a school that is trying to get back to the top of the MAAC conference. Jalen might not be the NBA prospect that Ja is, he might not be as good as Ja, but Jalen has the opportunity to cement himself as a legend at Siena. He has an opportunity to compile numbers that rival Ja’s 2018-19 season. Watch out for this kid, Jalen Pickett might just be the best player in Mid-Major basketball.

I asked Jalen Pickett some questions, here are the questions asked with Jalen’s answers…

Q - In what areas of your game are you looking to improve on for this upcoming season?

A - Becoming a more consistent shooter and a better finisher around the rim.

Q - What did you learn from the conference tournament loss to Iona?

A - That it’s a grind and it’s hard to win back to back games, you just have to have the right mentality and grind it out.

Q - As an under the radar player who is blossoming into a star at Siena, a school that unfortunately doesn’t get much national recognition until March, is it hard to constantly put up big numbers, have so many great games, and then have the national media not talk about you. Does that bother you at all?

A - No it does not bother me because that’s what’s supposed to happen. The more you win games, the more people talk about you, it’s a team sport and I want to put Siena on the national scale, get everyone talking about the team, every player on it, and to help make Coach Carm (Carmen Maciariello) a Hall of Fame coach!

Q - Any advice for younger basketball players who are being under recruited?

A - Grind it out and play the right way. Eventually your time will come and when it does, be ready, prepared, hungry, and angry. Go prove to everybody that your game is just as good, if not better than everyone else! BE READY TO MAKE YOUR NAME A HOUSEHOLD NAME!

Q - Your goals for this season?

A - The goal… NATIONAL CHAMPIONSHIP! I don’t dream small, I dream big, one goal at a time.