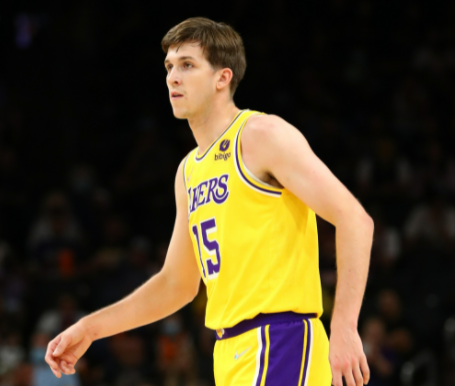 “For my teammates to have the trust in me to take that shot is very, very special.”

Rookie Austin Reaves was truly a hero for the Los Angeles Lakers in Wednesday night’s game vs. the Dallas Mavericks - carrying the team to a 107-104 victory with his game-winning 3 that no one saw coming.

For Reaves to even be sporting an NBA uniform in Wednesday’s contest, let alone playing overtime and trusted to hit that miraculous 3, could be argued as a long shot - no pun intended.

All of the 30 teams passed on Reaves during draft night, and the two-way contract he signed with the Lakers only graduated to a full-fledged roster spot after the team suffered injuries during training camp.

Over the past couple of days the Los Angeles team were void of a handful of players and staff members due to league health and safety protocols, so there was little choice left but to leave the game’s fate in the hands of the talented rookie.

"I mean, it's basically been the story of my life," commented Reaves after the game.

"I've always been underrated. Didn't go to a big high school, so didn't get recruited much, but at the end of the day, you got to produce on the basketball court and for me to hit that shot, for my teammates to have the trust in me to take that shot is very, very special."

Impressively, Reaves’ winning shot was his fifth made 3-pointer in 6 attempts - and his 15-point score total Wednesday set a new career high in scoring for the 23-year-old.

After the game, teammates embraced Reaves in memorable ways - including LeBron James presenting him with the game ball and DeAndre Jordan sneaking up behind him to dump a bucket of ice water over him.

"Just the genuine nature of the guys," said Reaves when asked what stuck out about the moment.

"You don't see that much, especially with the type of guys that we have on this team -- six Hall of Famers and then all the guys that have been in the league for 10-12 years. So, really just the genuineness of it is just special.

"I'm lost for words. I mean, I've grown up watching all of these guys play, so for them to ... for me to even just be teammates with them is special."

Well, that was heartwarming.

The Lakers play again tomorrow (Friday) against the Minnesota Timberwolves, with the Mavericks facing them as well on Sunday.