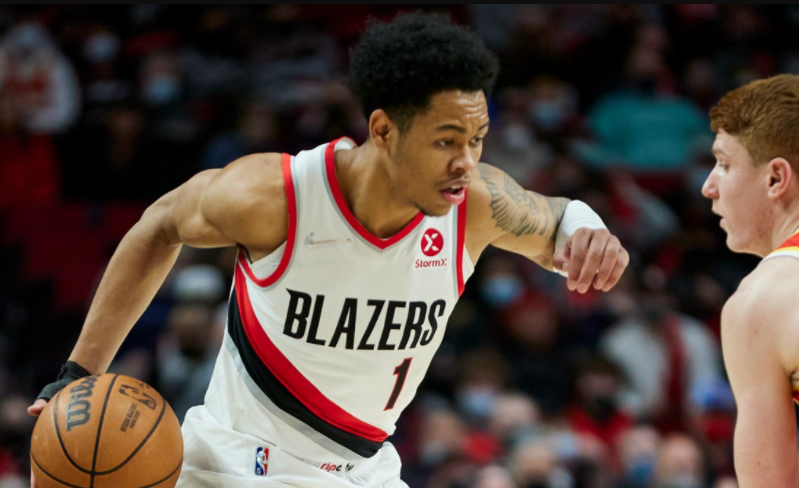 Monday night saw the short-handed Portland Trail Blazers finish off the Brooklyn Nets 114-108 - a game where James Harden was out due to a hyperextended left knee.

The matchup had originally been scheduled for December 23rd, but was postponed due to COVID-19 issues.

Portland’s Anfernee Simons had 23 points and 11 assists, Robert Covington had 21 points including five 3-pointers, and Ben McLemore had 20 points also including five 3’s - scoring a 3 with 31.9 seconds remaining to make it 113-105, sealing a triumphant win for the Blazers.

Simons made a comment about how teammate Covington’s performance against Durant helped the team.

“I think RoCo did a good job of playing him the second half,” said Simons. “So that was that was big for us to slow him down and just kind of play team defense. We’ve been playing very hard, we’ve been making a lot less mistakes on defense. That’s been helping us.”

For the Nets, playing in just his second game of the season, Kyrie Irving had 22 points, with Kevin Durant taking the lead in scoring with 28 points and 10 rebounds.

“It felt like I made a few good moves, but now it's just getting back in that NBA action of that athleticism and catching up to that speed, that’s really what it is at this point, I feel,” said Irving.

Who knows just what Harden would have brought to the table had he been present for the game - but he’s expected to be available on Wednesday at Chicago according to Nets coach Steve Nash.

“Certainly nobody in the world thought that we would win this game with the guys that we have missing, even though they're missing some important players too,” said Portland first-year coach Chauncey Billups.

“I'm more happy than anything for our team, to be honest. We've suffered a lot of losses in this building, a lot of bad losses.”

The Blazers yet again were without star players Damian Lillard, who was out with lower abdominal tendinopathy, and CJ McCollum, who has been out for an extensive 14 games after suffering a collapsed lung. Norman Powell was also out due to Covid-19 protocols, with Larry Nance Jr. out due to a right knee injury.

The Blazers go on to play the Denver Nuggets on Thursday, with the Nets facing the Chicago Bulls tomorrow (Wednesday).