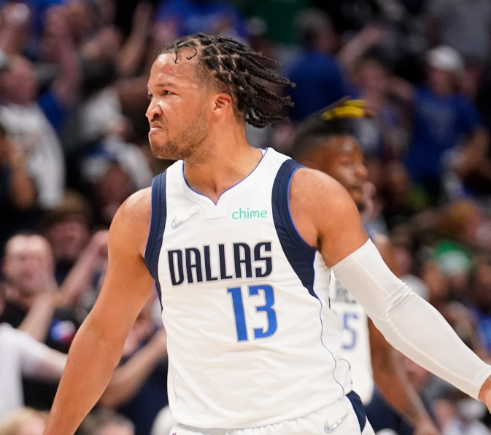 The three-pointers were hot with the Dallas Mavericks in Monday night’s win over the Utah Jazz, who were missing key member Luka Doncic due to an injury.

The team also had their fewest turnovers ever in a postseason contest with just three, and overcame a 10-point deficit following halftime.

Jalen Brunson scored a career-high 41 points in the matchup, becoming the fifth Mavs player to score 40 points in a playoff game - help lead Dallas to a 110-104 Game 2 victory.

“Yeah, the 5-of-5 start is great, but I had the same mentality when I was 0 for 5 last game, or whatever. ... You can’t fluctuate whenever, not even when (Doncic) is in or out. Because you need guys to make plays.”

Maxi Kleber scored 25 points and was 8-of-11 from beyond the arc which placed the Mavericks ahead to stay with 4:21 remaining, also adding another 3 on the next possession.

“I started this morning, I was talking to (Dorian Finney-Smith) and I told him, ‘Doe, I’m going to let 10 3s fly tonight.’ And he said, ‘That’s my dog.’ And that kind of set the tone for the day,” said Kleber. “The mindset is we know they’re going to leave certain guys open to shoot. We’ve just got to let it fly.”

In the midst of an exciting win following many losses, Mavericks coach Jason Kidd remains realistic and hasn’t lost sight of what’s to come for Dallas.

“We did what we had to do, which was win tonight. But we were only focused on tonight,” said Kidd. “We understand what’s in front of us, what’s coming. It’s going to be a hostile environment.”

"The telltale is we can’t have Brunson have the night he had and also be able to kick the ball out for those looks,” said Jazz coach Quin Snyder. “And when those passes are kicked out, I thought we weren’t as sharp mentally in our ability to rotate. And that’s something that we’ve done before.”

The Mavericks move on to Game 3 on Thursday night in Utah, where they’ve lost the last 11 games.