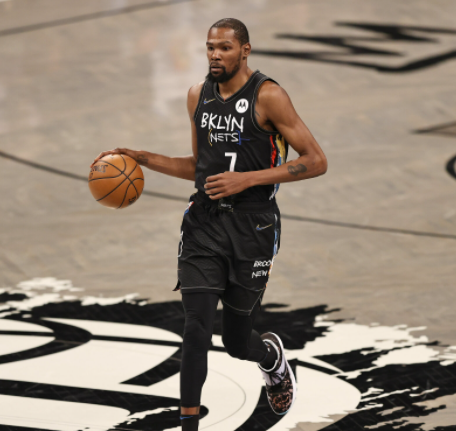 However hope is not lost for the team, and KD remains unfazed.

“I'm not looking at it like we're just not a good basketball team,” Durant added. “It’s like there wasn't a lot of continuity with me and Kyrie [Irving] out of the lineup, that's just what it is. When we're all on the floor together, I like what we got.”

It was on January 15th that Durant took the blow to his knee, during a winning game over the New Orleans Pelicans. The injury had KD off the court and in rehab for over a month and a half.

Over the course of his rehab, the Nets suffered an 11-game losing streak. The team also traded James Harden and Paul Millsap to the Philadelphia 76ers just prior to the trade deadline in February for players Ben Simmons, Seth Curry, Andre Drummond as well as two future first-round picks.

But even with KD’s return to the Nets on March 3rd, in addition to the team regaining full-time play from Kyrie Irving on March 27th due to the lifted New York City vaccination requirement - it appears that Brooklyn still has yet to find its rhythm again.

At least Durant, Irving and Nets coach Steve Nash are remaining optimistic for their team’s near-future. "I mean, who knows if we do it or we don't, but we have the belief and we'll give it a shot," said Nash.

"I don't know that many teams, other than maybe ours last year, have been in this position before where we've played a handful or more of games together going into a playoff, but it's not like there's a blueprint. But we can't diminish our belief, our attitude; we fight every day to get a little bit better ...

"If we get negative or think this is too much or the world's stacked against us, this is not going to be productive. And I think all of us are kind of enjoying the challenge."

Irving chimed in about his team’s positive attitude following their losing game to the Atlanta Hawks on Saturday.

”The reason why we're so confident is we've been in so many different scenarios on different teams," he shared.

"Who cares?" replied Durant when asked whether he’s observed the standings.

The Nets go on to host the Houston Rockets tonight (Tuesday, April 5th), where they’ll have another shot to channel their optimism into a win.