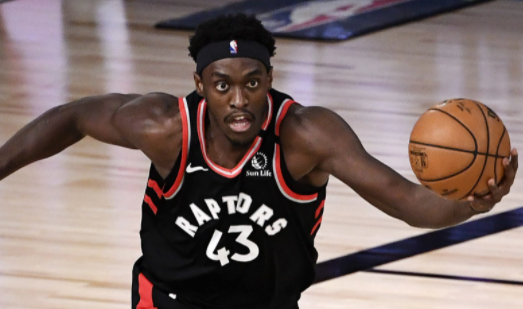 The Toronto Raptors took down the Washington Wizards 102-90 on Sunday night, with great help from Pascal Siakam who scored a generous 31 points for his team.

Sunday’s game marked the first back-to-back win for Toronto since their five-game winning streak from October 27th to November 3rd.

“We don’t have a 7-footer out there, but we have guys that can do multiple things and are great on defense,” said Siakam. “We’ve just got to bring the effort every single night.”

Raptors coach Nick Nurse was pleased with his team’s defensive performance during the first quarter, when the Wizards shot 5 for 22.

“I thought that group that started set the tone, but I also thought the guys who came off the bench brought the same kind of energy and maybe even a little more,” said Nurse.

“That’s kind of what we’re hoping for it to look like. It was a good, all-around team effort defensively.”

For Washington, Kentavious Caldwell-Pope had a season-high 26 points, with Bradley Beal scoring 14. “Shots just weren’t falling,” said Caldwell-Pope, “and I feel like we let that dictate our defense. We weren’t really playing hard and they were making everything that they threw up.”

“Early on, I thought we generated some pretty good looks, but they didn’t go in,” said Wizards coach Wes Unseld Jr. “That tends to have a snowball effect. It’s demoralizing.”

Since the Wizards’ five-game winning streak came to a close on November 17th, the team has lost two straight, three of four and seven of eleven games.

“In the early season, we bounced back from these stretches,” explained Unseld.

“This has kind of been the longest duration where things have been kind of tenuous for us. It’s certainly a test. We have no choice. We have to pull together and we have to dig ourselves out, and we’ve got to find a way.”

We’ll see how the Wizards play as they face the Indiana Pacers in their hometown tonight (Monday).

The Raptors will go on to host the Oklahoma City Thunder on Wednesday night, where a 3-game winning streak is a possibility.