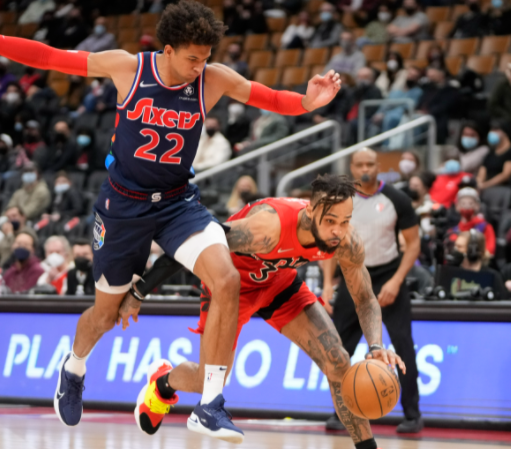 “We deserve to get our share of wins,’’ says coach Nick Nurse.

Sunday night saw the Toronto Raptors’ Pascal Siakam had 26 points and 10 rebounds, with Precious Achiuwa scoring 21 points to carry the team to a 93-88 victory over the Philadelphia 76ers.

Chris Boucher also had 12 points and 14 rebounds to help Torontostretch their road winning streak to six.

With that said, Philadelphia had taken on big man James Harden to make baskets in times of need.

This time, Harden tried his best with the ball in his hands during the remaining 2:25 - but the Toronto team competing for a spot in the Eastern Conference playoffs did well to keep him in check.

''He's got all the options,'' said Raptors coach Nick Nurse. ''He went to the float game and we made some plays on it. That's really the defense.''

Harden had slipped on two free throws with Philadelphia down 87-86, also missing a driving layup with just under a minute left with the team down 89-86.

With 37.3 seconds left, the Sixers acquired the ball but Joel Embiid lost it for an unfortunate turnover. Scottie Barns also missed two free throws, keeping the Raptors in the lead at 90-88 with 7.1 seconds left.

In another missed attempt, Harden was then whistled for an offensive foul against Boucher, crushing all hope for a Sixers comeback.

''We were trying to make it hard for him in the paint,'' said Boucher.

The Raptors had an impressive 20 offensive rebounds, holding an overall 56-40 edge on the glass while the Sixers had only made four baskets with seven turnovers in the game’s final quarter.

''We just got our butt kicked. That's all I have,'' said coach Doc Rivers.

For Philadelphia, Embiid had 21 points and 13 rebounds - missing each of his three 3-pointers while shooting only 6 of 20 overall from the floor.

''I just got to be better, it's simple,'' admitted Harden who scored 17 points Sunday.

Tyrese Maxey, on the other hand, scored 19 points. He was able to put Philadelphia back in the lead during the third with his late 3, helping them to secure a 74-69 lead into the fourth.

But each lead by the Sixers ended up slipping through their fingers as the Raptors played aggressively, and well - resulting in a much-needed win for the team as they fight for the sixth seed as the regular season tapers down.

''Can we go out there and look these really good teams eye-to-eye and go compete and believe we can win? And execute to win?'' asked coach Nurse.

Next up, the Raptors will go on to play the Chicago Bulls Monday night, with the Sixers up against the Miami Heat, also Monday.