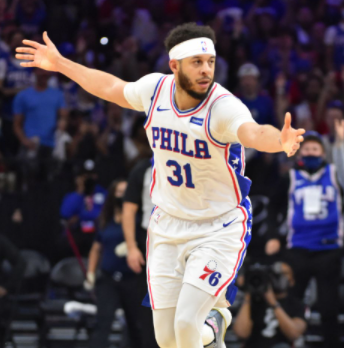 In Sunday night’s Philadelphia 76ers vs Oklahoma City Thunder game that saw the Sixers snag a 115-103 victory, Seth Curry was a leading star of the win.

In fact, the guard (who most know is Steph Curry’s younger brother) scored 23 of his 28 points during the game’s first quarter, and made 6 of 7 3-pointers in the opening period to carry his team to a 36-26 lead.

That said, it’s apparent that such streaks tend to run in the family - as we’ve seen these runs with Golden State’s Steph Curry.

But Seth believed that his run differed from the typical ones Steph goes on.

Also helping carry the Sixers to a win were Joel Embbiid, who had 22 points and nine rebounds.

“Not just with his play, but verbally on the floor. And he’s in great shape too. The blocks that he’s having … we’ve got a 7-foot-1 guy doing Eurosteps. It’s incredible watching him play.”

“We just competed tonight, especially in the fourth,” said Gilgeous-Alexander.

“We did everything we could to get the game. Obviously, it wasn’t enough, but we were going to put our hard-hats on and try to go get it for sure.”

The Thunder sure had an edge over the Sixers until the third quarter, when Philadelphia took on an 87-78 lead at its end.

Early in the fourth quarter, Furkan Korkmaz, Matisse Thybulle and Georges Niang all hit 3-pointers in a brief span of 88seconds to get the Sixers up 98-80.

Then with just over a minute left to play, in just his third game, Oklahoma’s Josh Giddey hit two free throws, then got a steal and made a 3-pointer to cut Philadelphia's lead to 110-102. It was then that Curry hit a 3-pointer putting his team back in control.

“They were on a big run," said Curry. "It got kind of loud in there for a second. ... we needed to kind of stop the run.

“Once we broke the press, Tobias (Harris) found me in the corner and I just took my time, set my feet and shot it like any other shot. Just one of those that you step into with confidence, and it was a big shot to kind of close the game out.”

The Sixers play again Tuesday vs. the New York Knicks, with the Thunder facing the Golden State Warriors also Tuesday.