At Age 35, 76ers’ Dwight Howard Is a Rebounding Wizard 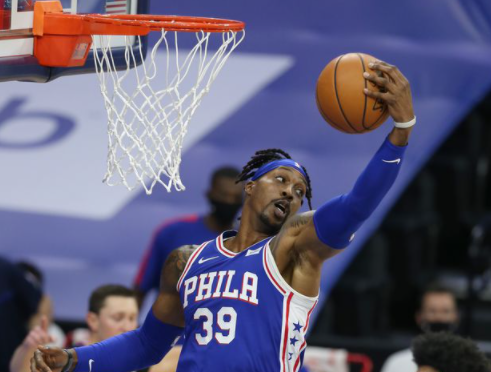 Philadelphia 76ers center Dwight Howard is one of the strongest rebounders in the NBA - having impressively led the league in rebounding five times. Currently, Howard ranks 12th on the NBA’s list of all-time rebounding leaders.

Now, playing in his 17th professional season at 35 years of age, Howard is doing anything but slowing down - in fact, he’s currently having the most productive rebounding season of his entire career.

Howard may be playing fewer minutes per game with the Sixers today than in his earlier days, but he’s grabbing more rebounds on a per-minute basis than ever before. With an average of 17 rebounds per 36 minutes of playing time, it’s safe to say that Howard is a rebounding wizard.

When Howard was asked about how he’s been able to be so productive in a position that was limited, here’s what he had to say. "The biggest thing is just making my minutes count," Howard shared.

"Also just showing my teammates that it doesn't matter how many minutes I play. When I'm on the floor those minutes are valuable to me, and also to the team. So I just try to put all my effort and energy into what exactly this team needs me to do. I know that I can be very effective in rebounding the basketball on both ends of the floor.

"It's very, very difficult to do in this game, this new era, because of the 3-ball and the floor being spaced so much, but it's a lot of fun. I enjoy it, and [I] just want to continue to rebound at a high level for my teammates and do whatever I can to get more options for us, rebounds and stuff like that. And it's been really good."

Howard isn't only outperforming his younger selfthis season - he’s also outperforming the rest of the league. He’s become a total master of his greatest strength and has completely embraced his rebounder role with pride.

"Whatever situation I'm put in, if it's wanting me to be a scorer for a team, just rebound, just block shots, whatever is being asked of me I can do it to the best of my ability and be the best for my team," said Howard.

"The biggest thing is just winning. That's the most gratifying thing. When I was younger, of course, I wanted to score, be the man and do all that stuff. And over time you realize that none of that stuff really matters. The only thing that matters is winning.

“And like I was saying earlier, it's about maximizing your minutes. That's something that I talk to my teammates about a lot, especially the younger guys. Understanding, hey you might not get a lot of minutes on the floor right now. It could be five minutes, it could be three minutes, but make those three minutes count. Give all you got for those three minutes because you might not ever get those two minutes back again, and you won't. So you just got to take that and take advantage of a moment."

I there’s one thing we do know, it’s that Howard will go down in history as one of the greatest rebounders the league has ever seen when he does ultimately decide to hang up the suit.