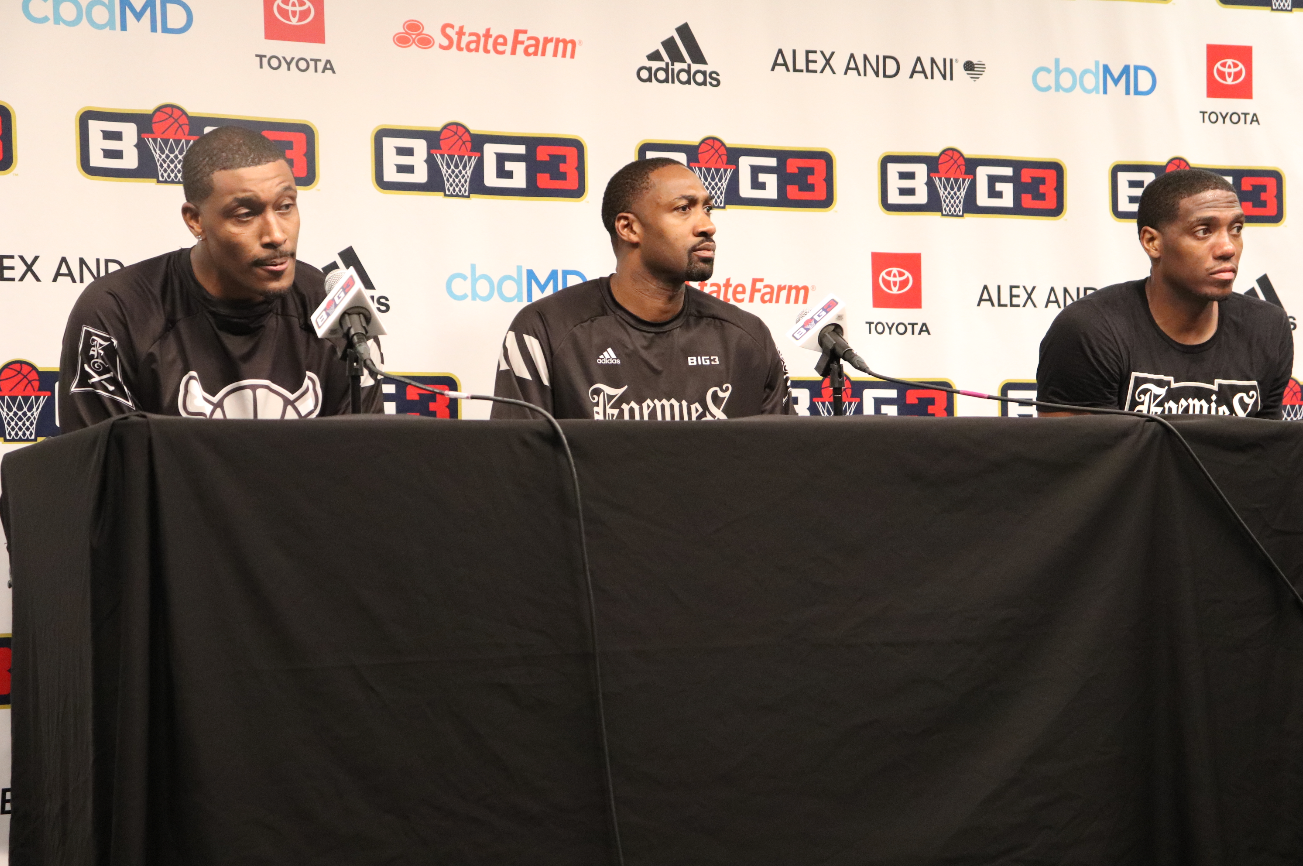 We out here, BIG3 Week 2. Charlotte and Philadelphia were the destination spots. It was a fun weekend, we saw some good games, great trash talk, and dominant performances.

The first game in Charlotte was between the Triplets and Trilogy. Man... Triplets look really good, this is a championship caliber team and it’s another woman out there coaching the men. Lisa Leslie has asserted herself as one of the better coaches in this league, it’s going to be very interesting to see how this team grows under her watch and if they end up making a run at the championship. Today, Joe Johnson dropper 20 points to go with 8 rebounds, he’s looking like a MVP candidate and it’s so amazing to watch Iso Joe dominate this league like he’s in his prime. James White led the way for Trilogy with 18 points and 6 rebounds but his team falls to 0-2. Things don’t get easier for Trilogy as they match up with Power in Atlanta next week, it’s looking bleak for the season 1 champs, they could legit start 0-3. I’m really worried about them going forward.

In the next game we saw a doozy between Ball Hogs and Enemies. To many peoples surprise it was a 26-13 Ball Hogs lead at half but Enemies took over in the 2nd half with a 18-2 run! They won the contest 50-45, Craig Smith had another productive week as he scored 19. Gilbert Arenas made his BIG3 debut and scored 13 points. In his own words he claimed that he was out of shape, got fatigued a bit earlier than he expected. He’s planning to be 100% by week four, so mark your calendars for July 13th when Enemies play Aliens in Providence! I asked Gilbert what his team needs to work on in the next few weeks, he stated that they need to be much more consistent, less anxious, and get more comfortable with each other. I respect that reply and I myself am very excited to see how this super talented team meshes together in the coming weeks. Sure the team is 1-1 but they exude talent, Craig Smith and Frank Robinson are REALLY good, nobody was looking out for them coming into this season, they are legit unsung heroes and will continue to thrive under the radar on this stacked team. The Ball Hogs fell to 0-2 and still haven’t touched a .500 win % in BIG3 history. Will McDonald was their lone bright spot as he tallied 27 points to go with 11 rebounds.

The day in Charlotte came to a finish as Killer 3’s pounded 3’s Company by a score of 50-32. There’s not much to say about the game because, one team hit their shots, the other didn’t. It was as simple as that! Stephen Jackson went out there and dropped a cool 22 including a bomb from 4-point land. I’m really loving the new look Killer 3’s, they seem a lot more team oriented, a team that is having a lot more fun, a team that wants to win. I know it might be redundant but they might just contend for the ‘ship too. There’s a good group of teams that can win it all this year and that just speaks volumes to the even playing field this league exhibits. On the flip side, 3’s Company falls to 0-2, this team looks out of it and I’m really worried. They seem to be falling into the same hole Trilogy is... not ideal.

The next set of games took place in Philadelphia at the Liacouras Center. The first game was between Bivouac and Ghost Ballers, both teams entered the day 1-0. Now this game was interesting, Ghost Ballers had led near the entire game despite only getting points from Ricky Davis and Jamario Moon. Those two combined for 41 of their 51 points tonight. Mike Taylor chipped in 10 points late in the contest, providing the spark plug necessary to lift Ghost Ballers to the top. For Bivouac, Will Bynum scores 17 and looked good again. Bynum actually gets my move of the week as he pulled out the shamgod hesi and had Mike Taylor wondering if his ankles were okay! They lost this game at the 3-point line, they only made one and Ghost Ballers sunk five of ‘em. Aside from that it was a very even game, a game that the trio of Ricky Davis, Jamario Moon, and Mike Taylor earned. But we all know George Gervin’s team will need to see Carlos Boozer and Mike Bibby pitch in If this team wants to be successful.

The next game was a clash between the Aliens and 3 Headed Monsters. I have very high hopes for this 3HM team, they disappointed in week one and didn’t make much improvement in week two. Sure, 3HM walked out of Philly with a 50-44 win but it wasn’t impressive. This team is too good to squeak by a team like the Aliens. Rashard Lewis did his thing and dropped another 18 in addition to 8 boards. Mahmoud Abdul-Rauf had just 3 points, I know he’ll come to form in the next few weeks and 3HM could really use his 8-13 points per game. Larry Sanders had a good game, 8 points, 10 rebounds, and a block. I highlighted Larry as an X-Factor going forward for 3HM and he looked good tonight! The Aliens were eaten alive on the boards... just 20 boards for them in comparison to 3HM’s 37! How about this, 14 offensive rebounds to just one. Yikes! That’s where this game was decided, we all know it. Greg Oden and Ryan Hollins were straight up bullied by the trio of Sweet Lew, Reggie Evans, and Larry Sanders. Those three lived up to the 3 Headed Monsters name. Next weeks game between 3HM and Killer 3’s is sure to be the game of the week, make sure you tune in and watch some great basketball. Lets see if 3HM can put everything together and play to their potential!

The final game of the weekend was between Tri-State and Power, two teams that have given us some elite games in the last few years. Power asserted their dominance again with a 51-43 win, gosh this team is incredible. Cuttino Mobley had to lock up player of the week honors as Cat totaled 23 points, 7 rebounds, 3 assists, and 4 steals. Have a day Cuttino! 43 years old and in his prime, Cuttino shows no signs of slowing down. For Tri-State it was Amar’e Stoudemire and Nate Robinson combining for 30 of the 43 points, Amar’e had scored 12 straight at one point. But the best moment of this game came from Jason Richardson Of Tri-State. Once upon a time he was a Slam Dunk Contest champ, we saw every bit of that when he pulled out the reverse slam tonight and showed us he’s still got some fuel in the tank! Tri-State has a really important matchup next week in Birmingham as they take on 3’s Company, both teams are 0-2. You do not want to be that team starting off 0-3...

Another fun week of the BIG3 is in the books. Who is your pick to win the BIG3 championship? What player has impressed you most? What player do you expect to step up soon? Tweet me your answers @Blutman27 on Twitter! Next week the tour heads to Birmingham and Atlanta, lets go!