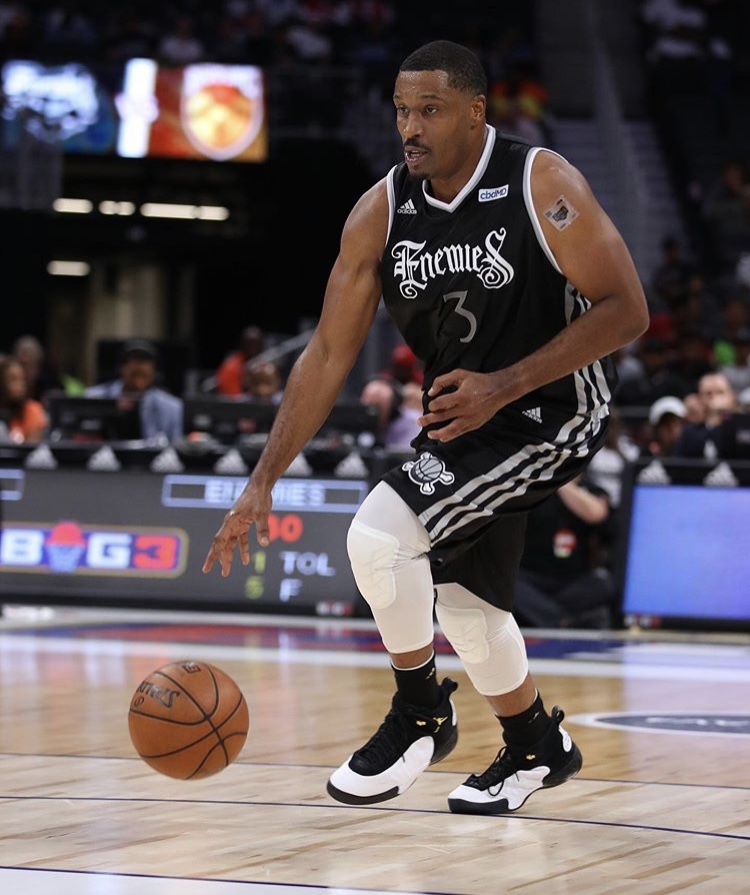 The third season of the BIG3 is five weeks in and many compelling storylines have descended upon the league thus far. One story in particular has caught everybody’s attention and that is simply the star power that the Enemies possess. We found out that this Enemies team would be headed by Gilbert Arenas, Lamar Odom, and Perry Jones and many basketball fans flocked to the BIG3, pledging their allegiance to the Enemies squad after seeing Gilbert and Lamar join the team. Then the BIG3 Draft process began and the Enemies managed to scoop up the #1 pick in round one as well as the final pick of rounds two and three. So, they draft Royce White and golly look at the star power this team boasts now! In the second round Craig Smith went and Frank Robinson in the 3rd. This deep Enemies team was pegged as the favorite from the moment they drafted Royce. Gilbert, Lamar, Perry, and Royce... Well, little did they know that the 35 year old from Inglewood, California was going to be their star. You see, this article is about... Craig Smith.

Back on draft night, moments after Craig was selected I had the opportunity and pleasure to speak with him. When I asked his expectations for the upcoming season, he of course said to win it all, then shifted focus to how important it was for him to showcase his skills. Smith said, “I’ve been known as a low-post player but I want to show I’m more than that.” Simply put, Craig has showed us he’s much more than a low-post player as he’s shooting 41% from three after four games. Smith is scoring 21.0 points per game, corralling 5.8 rebounds per, and is shooting 47% from the field. This stat line is absurd and he’s not getting much love for it at all! There should be a MVP battle between Craig Smith and Joe Johnson… Instead it’s ISO Joe receiving ALL the MVP love. Yes the MVP hype for Joe Johnson is deserved but the lack of MVP talk for Craig Smith is mind boggling. Pay attention as I’ll run back the first four games for y’all. Game one, it’s a 50-43 loss to Bivouac, Royce is ejected early, Gilbert doesn’t play, and Craig Smith takes full advantage of the spotlight scoring 26, adding 10 boards and hitting three trey balls. The next highest scorer for them had just 10. Smith carried a team missing their best two players and gave them a fighting chance on opening night. Next game out, Enemies trail 26-13 at half to Ball Hogs. An absolute shock but Craig was not letting his squad fall to 0-2. He scores 19, hits four 3’s and propels his team to victory! Week three, his Enemies kept that momentum going with a 51-35 beatdown of the Ghost Ballers. Craig scores 23, grabs 6 boards, blocks a pair of shots. Two weeks ago, he puts up 19 and 6 with another pair of blocks, and drains three more 3’s. Mr. Smith is showing y’all he’s not just a low-post player, showcasing his entire arsenal like he said he would. And sadly he’s still not even the most or second most talked about player on his team! It is my sincere hope BIG3 fans decide to talk about Craig Smith after a game like that. It’s also just super unfortunate that Craig Smith’s dominance has lacked recognition due to the fact that he’s playing in the shadows of Gilbert Arenas, Royce White, Perry Jones, and Lamar Odom’s departure.

Listed below is a short Q & A with Craig.

Q - Why do you think there’s a lack of recognition surrounding your name despite thriving in the BIG3?

A - My name isn’t as big as most the guys in the league so I just try to go out and show people that have never heard of me that I can hoop. To me that’s all that matters. I can only do what I can control.

Q - What have you done to improve upon your game and manipulate defenses in the 3 on 3 setup?

A - I’ve got a hot three point shot to go along with my strong post up game.