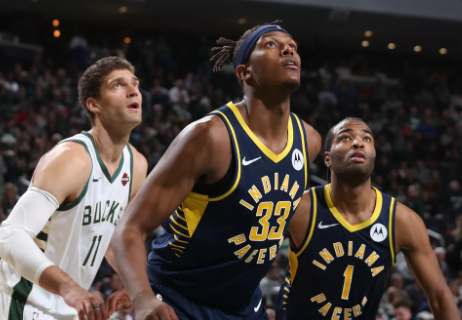 It was one hell of a fourth quarter for Indiana.

The Indiana Pacers were able to to defeat the Milwaukee Bucks 118-111 to snap their season-worst six-game losing streak Wednesday night.

The Pacers’ win was largely in part due to point guard Malcolm Brogdon, who made all the right moves in the fourth quarter alongside teammates Jeremy Lamb and T.J Warren.

These moves included making back-to-back 3-pointers, several free throws and a 14-foot runner to secure a 14-point lead with just 6:19 remaining in the game.

"I think my teammates rely on me and I think the past five game games I haven't been doing my job, calming the game down, finishing the game," said Brogdon.

"But tonight, I felt more like myself. My teammates trusted me with the rock."

Warren led in scoring with 35 points, with Brogdon bringing 17 points that included scoring on back-to-back baskets in addition to his 13 assists.

”I remember saying in the huddle, at the end of the day, you know it's a game of runs we've just to go finish the game," shared Oladipo.

Needless to say, it wasn’t in Milwaukee’s favour that their MVP Giannis Antetokounmpo was absent again following the birth of his first child, Liam Charles Antetokounmpo

But the team still did what they could.

"We kept fighting,” said the Bucks’ Donte DiVincenzo, who led his team with 19 points. "We had guys come in at the end and kept that energy high."

The winning Pacers play again Friday facing the New York Knicks, with the Bucks going up against the Detriot Pistons tonight.