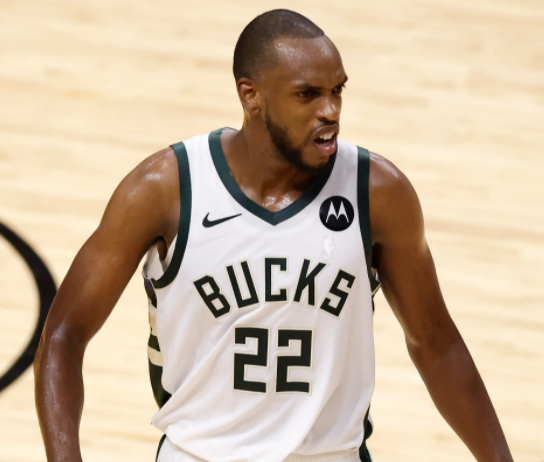 “If [Middleton] wants the ball, he gets it,” says teammate Giannis Antetokounmpo

Khris Middleton is on top of his game as of late.

Sunday’s Game 3 saw the Milwaukee Bucks rout the Atlanta Hawks 113-102 for a 2-1 series lead, with Middleton hitting a trio of 3s in under two minutes.

"What I saw today was unbelievable. It was freakin' unbelievable," said Bucks star Giannis Antetokounmpo.

"Carried the team at the end. He turned the ball over like two times, and after that, he was locked in. He was like, 'Pass me the ball.' And we gave him the ball. There's moments we know when to set screens for him, we know when he wants the ball, and that was the moment.

"We were like, 'Get the hell out of the way, give him the ball, take us home, Khris,' and that's what he did."

According to ESPN Stats and Information research, Middleton went 6-for-11 on contested shots in Sunday’s fourth quarter - tied for the most contested makes in a fourth quarter this postseason.

"Once I realized I hit two in a row, I just told myself to keep trying to find a shot to get up knowing there was a good chance it was going in," said Middleton.

"He's just a hell of a player," said Budenholzer. "There's lots of great players in this league, and we know what Khris can do for us and how we can win with him. That's what's most important."

During the postgame news conference, when a reporter brought up the fourth quarter and how it could have beenan opportunity for Antetokounmpo to take over - Antetokounmpo shook his head in disagreement mid-question.

"Nah, I trust this guy to death," said Antetokounmpo, Middleton at his side. "If he wants the ball, he gets it. Simple as that."

It’s that “unselfish” and trusting quality among the Bucks that has certainly served as a key ingredient to their recent success - and we’re all for it.

The Bucks and Hawks face each other again tomorrow (Tuesday) in Game 4.