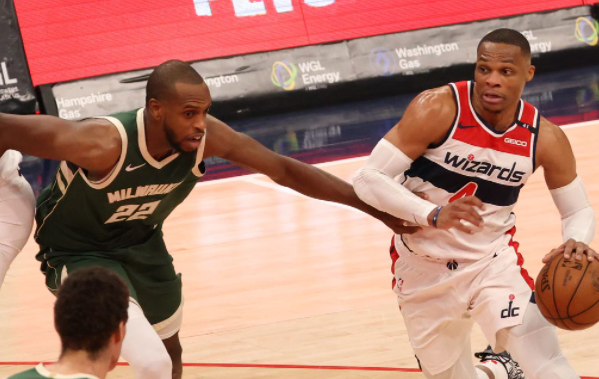 Wednesday saw the Milwaukee Bucks playing for the second straight night (and fourth straight win) beating the Washington Wizards by a single point for a 135-134 victory.

Milwaukee’s Jrue Holiday brought 29 points to his team’s win in the face of a staggering 42 points coming from opposing team player Bradley Beal, in addition to a 179th career triple-double from Russell Westbrook.

"It took a little bit of everybody to find a way to win this game," commented Bucks coach Mike Budenholzer.

With his triple-double, Westbrook had an impressive 29 points, 17 assists and 12 rebounds that just couldn’t guarantee a win for the Wizards. He trails closely behind Oscar Robertson, whose 181 career triple-doubles stand as the highest recorded total in franchise history.

The Bucks even played without two-time All-Star Khris Middleton, who was out with a left knee injury following Tuesday’s 124-118 victory game over the Brooklyn Nets.

"It's big for us," shared Milwaukee’s Donte DiVincenzo, who had scored 19 points. "I think it's a big thing for us to come together and know we can pull it out in different ways."

Alongside DiVincenzo, teammate Pat Connaughton scored 16 points and made a pair of 3-pointers in the game’s remaining 90 seconds, with Bryn Forbes adding 14 points to carry his team ahead with a 3-pointer, breaking the tie with 2:23 left.

The Wizards’ Daniel Gafford believed he was fouled as his shot attempts were blocked by Holiday and Connaughton with just 30 seconds remaining, when his team was trailing by a mere 2 points.

Gafford shared how he regretted his strategy after the game.

"I should have really just passed up the ball at the end," he said.

"Russ was right beside me. That would have been the smart play instead of trying to go up with that last layup attempt. It really just cost us the game, to be honest."

With just 6.8 seconds left in the game, Milwaukee’s Brook Lopez carried out a putback dunk to push his team into a four-point lead, which was immediately followed by a 3-pointer by Washington’s Beal with 5.3 seconds left, cutting the Bucks’ lead to a close 135-134.

"We're putting ourselves in positions to win," said Beal. "We're getting better with executing and closing out down the stretch, but obviously we can be better."