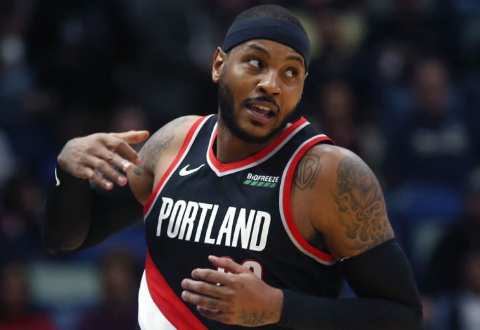 The Portland Trail Blazers, this time joined by 35-year old forward Carmelo Anthony, were taken down 115-104 by the refurbished New Orleans Pelicans in Tuesday night’s game.

Despite his team’s loss, Anthony — who last played in the NBA on Nov. 8 of last year — was feeling anything but despair. In fact, he was simply appreciative to be back playing the sport he loves.

“It felt great just to be back into the flow of the game, be back on the court, be back to where I think I belong,” said Anthony outside of the Trail Blazers’ locker room.

Anthony got the Blazers off to a great start, shooting a 3-pointer from 26 feet out — but he just couldn’t keep the momentum going, missing 10 of 14 shots and finishing with just 10 points.

Nonetheless, we can be forgiving of Anthony’s unpracticed ways for the time being. The 10-time All-Star just needs some time.

“For having (only) a morning shootaround, I thought he was pretty good,” said Blazers coach Terry Stotts. “I thought every shot he had, he was getting a good look at the basket.”

“The greatest feeling of all was to feel wanted by a group of guys who believe in me and my talent and what I can bring to the game,” Anthony shared. “It wasn’t just the players. It was the coaching staff. They really showed a strong level of belief in me and what I can still do.”

Supporting a rusty Anthony were teammates C.J. McCollum, who led the Blazers with 22 points, and Hassan Whiteside, who brought 14 points and 14 rebounds.

“I think trying to get to my spots and assert myself a little bit and getting other players involved, I think I did an OK job,” said a recovered Ingram.

“I felt pretty good today. I didn’t have any restrictions.”

The two teams will play again on Thursday, with the Pelicans facing the Phoenix Suns and the Trail Blazers facing the Miluakee Bucks.