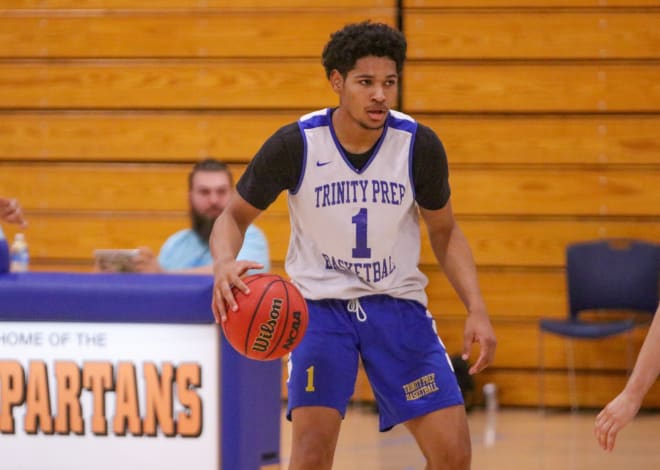 I found myself at the Halloween Hoops Showcase at Coronado High School in Henderson, Nevada. October 24th, a cool fall night I witnessed plenty of talent on full display. An impressive group of talent featured... Julian Strawther, Jaden Hardy, Noah Taitz, Will McClendon, Mwani Wilkinson, and so many more including Daishen Nix who stole the show...

Julian Strawther, the Gonzaga commit willed Liberty to victory over Desert Pines, 69-63. Julian was sporting a Gonzaga shirt in warmups and Zaga fans will love watching him play in Spokane. Strawther has a smooth jumper and displayed a great variety of skills offensively. He’s a potential star at Gonzaga, they got themselves a good one!

In Coronado/Desert Oasis it was Jaden Hardy that had everybody’s attention. The #7 player in the class of 2021 led Coronado to an easy 77-54 win. Hardy was getting buckets and tossing out dimes at will as his team coasted to victory. We’re unsure of where Hardy will be playing college ball but I’m thinking Kentucky is the leader for the combo guard. Keep in mind he’s likely a one and done that will star in college. I definitely like what I saw from him tonight.

The final game of the night was a clash between Trinity International and Bishop Gorman. Bishop Gorman won by a score of 57-51. Gorman didn’t look all that good tonight but they’ll be a great team as they get further into their season. Stanford commit, Noah Taitz will be a solid contributor for the Cardinal in the near future. At this point we don’t know where Mwani Wilkinson and Will McClendon will play college ball but those two could definitely be impact players as freshman! Mwani is just outside the top 100 in the class of 2020 and I think this kid has great potential so keep an eye on him! The star of the night was undoubtedly Daishen Nix. The UCLA commit flashed greatness as a floor general. This was my first time seeing Nix play and I had heard how incredible his passing was. Well, his vision is ridiculous! I found myself saying, “What a pass... what a great pass!” Time and time again. I was fascinated by how easy it was for Nix to drive to the rack and get a quick bucket. He had split a double team around half-court with a quick spin move that opened up a wide open lane to the basket and finished that with an and-one layup which had the crowd gasping in awe. Nix was simply fearless all night. Just fantastic and he is undoubtedly going to be special. Daishen Nix is a blossoming star.

The basketball talent in Southern Nevada right now is just outstanding. This is a special time so go watch some of these future pros ball out as high schoolers!