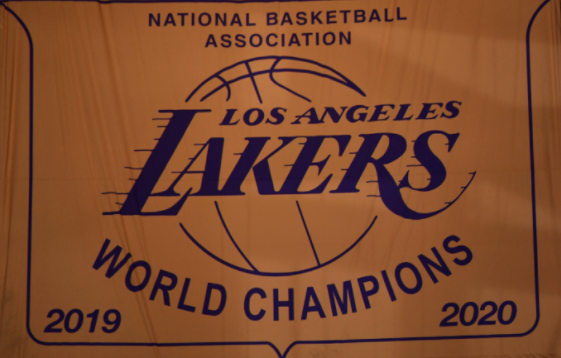 “We had our ring night; we wanted you guys there, but we wanted to make sure we saved the banner for y’all."

After a season dramatically altered by a pandemic, the team had been waiting for the right moment where fans could at least be with them in the building and be part of the special experience.

"We said we would not unveil this banner until we had some of you guys in the seats, so this is your guys' moment," said James said into a microphone prior to his team’s 124-122 win over the Houston Rockets. "We had our ring night; we wanted you guys there, but we wanted to make sure we saved the banner for y'all.

"So, we love you guys, and the road to back-to-back starts in about a week. So, let's get going."

After James’ speech, Lakers longstanding public address announcer Lawrence Tanter counted down, "3-2-1," followed by the removal of the black cloak containing the message "Stay Tuned, Lakers Family" that had been masking the championship banner since opening night.

The Lakers’ victory against Houston meant that they can avoid the play-in tournament, where they would be up against powerhouse teams like the Golden State Warriors, Memphis Grizzlies or San Antonio Spurs.

Lakers coach Frank Vogel commented before Wednesday’s game that it’s a possibility he’ll have his team fully prepared and healthy for just the second time this season as they approach Saturday’s matchup in Indiana.

"Obviously it's exciting to get everybody back, get our team back fully healthy," said Wesley Matthews, who helped to secure the Lakers’ win over Houston on the defensive end. "And from there, we're going to see where we are."

Matthews, however, was nowhere in sight during his team’s special banner ceremony - because he had been praying in the locker room.

"That was something that I felt was for them," he shared. "And me, my fire burns, my hunger burns to raise another banner."

Roughly 4,000 fans filled the Staple Center seats on Wednesday, which may be significantly fewer than the arena’s 19,000 capacity for Lakers games - but it’s also more than double the 1,915 fans that had attended LA’s game against the Boston Celtics on April 15 (which marked the first game that fans were allowed back).

"We've waited until now because our banners have always been about our fans,” said Lakers governor Jeanie Buss, who shared center court with James on Wednesday.

"It's so good to hear you guys together and be together as family again. We've been awarded our trophy; the players have their rings.

“Our final piece of business to commemorate our 2020 NBA championship is to honour our fans with the banner."