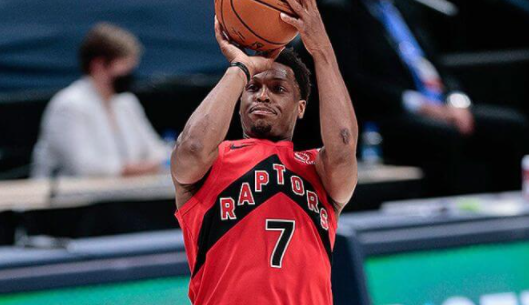 Sunday night marked a victorious game for the Toronto Raptors as they ended a three-game losing streak, beating the Los Angeles Lakers 121-114.

As Toronto was missing several of its teammates (Fred VanVleet, OG Anunoby, Chris Boucher and Gary Trent Jr.) due to injuries and required rest, the win was largely in part due to the dominant performances of Toronto’s Kyle Lowry who had 37 points and 11 assists, and Pascal Siakam who had 39 points and 13 rebounds.

The game’s half saw the Raptors leading 72-59 after blasting L.A. for 40 points during the second. While the Lakers did come back within 10 points early in the fourth quarter, all hope was lost when Lowry stepped it up with a personal 8-2 run.

With Lowry being linked to Los Angeles at the trade deadline, he commented that this did not factor into his performance.

"There's no extra motivation," said Lowry. "I didn't care about anything other than winning this game."

“I said at halftime ‘no matter what happens in the rest of this game, let's have fun’, right. I think that's one thing that we can always kind of, you know, rally around each other is having fun. This game is a game of joy and fun and when you’re having fun, things like that happen. We just went out there and we literally just had fun tonight and, you know … and that was big."

Siakam shared that finally being able to notch a win after recent losses was a step in the right direction. "I think we've got to take care of the ball. Obviously, that's the most important (thing in the fourth quarter)," said Siakam.

"Staying solid, continuing to follow the game plan on defence, and I think that's all we can do. Obviously, we know what's happening and we talk amongst each other and then Coach (Nick Nurse) puts an emphasis on it too, so we've got to go out there and execute it."

For the losing Lakers, LeBron James had 19 points, seven rebounds and six assists before heading back to the locker room with 6:42 left to play. After missing 20 games due to a right ankle sprain injury, this was only James’ second game back.

L.A.’s Kyle Kuzma also had 24 points for his team, with Anthony Davis adding 12 and Andre Drummond adding 19 points and 11 rebounds.