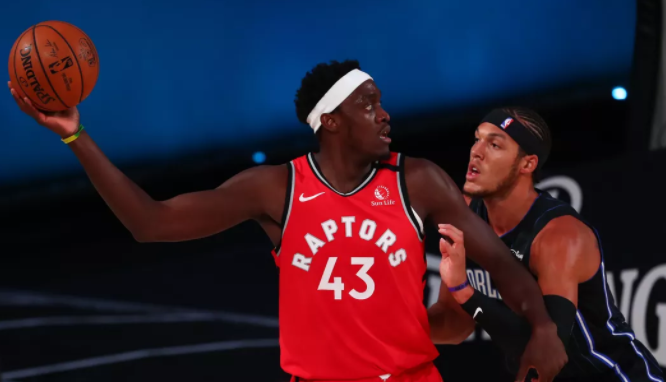 "I've been taking the right shots and the shots are going to fall.”

The Toronto Raptors’ Pascal Siakam has been making baskets and leading wins.

In Sunday’s game against the Orlando Magic, Siam had 30 points and 10 rebounds - leading the Toronto Raptors to a 115-102 victory over the Orlando Magic whilst snapping their three-game losing streak.

“I've been feeling a little better, and I've been focusing on doing the things that make my body feel good, and living with the results,'' shared Siakam, who had suffered some injuries early on in the season

“That's been working for me in the last few weeks. I've been healthy. I've been taking the right shots and the shots are going to fall."

Toronto’s Kyle Lowry on the other hand had 12 points and 14 assists, with Aaron Baynes bringing 8 points only after the first half, and a total of 16 rebounds.

OG Anunoby missed his third game on Sunday with a calf injury, and Norman Powell missed his second with a quad injury. Powell reportedly hopes to play again Tuesday.

Uta Watanabe made all three of his 3-pointers coming off the bench, adding 11 points for the Raptors.

“I'm getting an opportunity and I'm doing my job to help the team win,” said Watanabe. “I’ve never had an opportunity like this and I can't take it for granted.’"

With that said, the Raptors havealso given up an average of 116.7 points across 12 losses.

“After the long (2019) playoff run, we came back and picked up right where we left off,’"said coach Nick Nurse.

“We came back last year and we were way ahead of schedule defensively, and we're probably a good chunk behind it this year.”

The Raptors will play the Magic again Tuesday night in the first of three consecutive home games.

It will be interesting to see how Spicy P continues to perform.