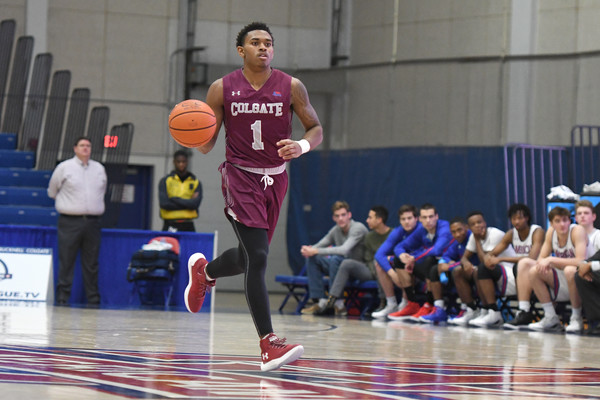 Jordan Burns, 6’0” guard, Colgate. Good ole Colgate. A college in Hamilton, New York that about 3,000 or so students call home for the time being.

Jordan Burns averaged 11.9 PPG, 3.0 APG, and 2.6 RPG in his freshman season. Virtually unknown across the college basketball landscape. Heck, I couldn’t even tell you who Jordan was if you asked me back during the 2017 season. Then his sophomore season began, Burns dropped 30 points in a win over Monmouth on November 9th of 2018. That was a home game, at Cotterell Court, a small arena on the Colgate campus that seats 1,750 people. I’m not sure what led me to clicking on the Monmouth/Colgate box score late that night but I did and I saw J. Burns put up 30 points, 6 assists, and 5 rebounds. Even shot 5 of 10 from three. I needed to keep up with Colgate, see if this Burns kid was legit. Legit he was, this kid could flat out play. In 30 games this past season he tallied double digit points in 23 games. He put up two double-doubles with games of 18 points + 10 assists and 23 points + 12 assists. For the season Jordan averaged, 16.3 PPG, 5.7 APG, and 3.0 RPG. He snatched 1.2 steals per game, shot 43.8% from the field, 48.6% on 2’s, and 39.4% from three. I definitely expect the three-point shooting % to rise as Burns caught fire during the best parts of March and showcased his deadly shooting. In the Patriot League Conference Championship, Burns dropped 35 on 10/16 shooting and 6/9 from three as Colgate routed Bucknell to secure a NCAA Tournament bid. Colgate was given a 15 seed and a game with 2 seeded Tennessee in Columbus, Ohio. Most people did not expect this game to be close at all, many watched just for Tennessee and their stars, Admiral Schofield and Grant Williams. But not me, I was talking up Jordan Burns on Twitter, letting my people know this kid was a baller and you needed to watch this game for Jordan Burns and only Jordan Burns. And what do you know, the story of the game was Jordan Burns. 32 points, 4 assists, on 12/20 shooting, but an absurd 8/13 from three. Sheesh! Social Media was going crazy about this performance, wondering why they had not heard about him all year. Colgate lost 77-70 that day, but Jordan Burns was officially on the radar. What I noticed in Burns games against Bucknell and Tennessee was how aggressive he was, how unafraid he was, and how confident he was. He had the killer instinct, that mamba mentality. Just go watch the shots he hit against Tennessee, Burns is going up against much, much taller and stronger athletes, but it didn’t matter. Burns beat them with creativity, the stepback 3’s, the slight hesitation to make the defender think for another second. It was fascinating to watch and I can’t wait to see what Jordan does in his junior season.

Don’t sleep on Burns and the rest of this Colgate team. A school located in a town of 5,000 or so residents, a school with about 3,000 students, a basketball arena that seats 1,750. One really good basketball team with a rising star who could very well be NBA bound.

My expectations for Jordan in year three are high, I’m looking for

I definitely think Burns and Colgate will win the Patriot league once again and return to the NCAA Tournament. My hope is that they are given a 14 seed and Jordan Burns can lead his squad to a win over a 3 seed, that would help Burns NBA Draft stock so, so much.

I asked Jordan Burns some questions, here are the questions asked with Jordan’s answers…

Q - In what areas of your game are you looking to improve on for this upcoming season?

A - This season I am looking to improve my ability to go left, defensive ball pressure and ability to see the floor even more.

Q - What did you learn from the close loss NCAA Tournament loss to a great team, Tennessee. Scoring 32, making 8 3’s, nearly completing a monumental upset. One, What’d you learn from this? And Two, How much confidence does this impressive performance give you going into next season?

A - I learned that my team and I can play with any team in the country when we are playing with confidence in ourselves and each other. I think going into next year I have the ultimate confidence in myself and my team because now we know how good we can be when we play to our potential.

Q - As an under the radar player who is blossoming into a star at Colgate, a school that unfortunately doesn’t get much national recognition until March, is it hard to constantly put up big numbers, so many great games, and then have the national media not talk about you. Does that bother you at all?

A - It’s not hard because I’ve been dealing with this my whole life. I’ve accepted my role as a underdog and every night I go out and play as hard as possible and continue to show everyone who is watching how good we are at Colgate University. It doesn’t bother me much because I know that at the end of the day, the work I put in will show in the times where I need it to show it.

Q - Any advice for younger basketball players who are being under recruited?

A - Continue to work hard and constantly believe in yourself. I’d say that self-confidence is something you need, especially when you’re under the radar. Everyone’s route to success ain’t the same and don’t worry about what other people have and don’t have because if you’re putting in as much work as you should then it will show eventually.

Q - Your goals for this season?

A - Win another Patriot League Championship, go to the NCAA tournament and make it to the Sweet Sixteen.