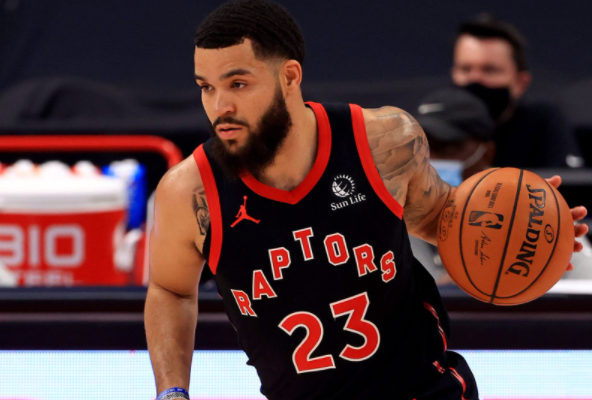 "I'll get my rest and my treatment and get ready for another one because the games aren't going to stop coming."

After nearly three weeks off the court due to contracting the Covid-19 virus, Toronto’s Fred VanVleet has been back in the game as if he’d never left at all.

With the Raptors now at 9 straight losses as of Sunday’s 99-117 game facing the Houston Rockets, VanVleet still brought the heat with 27 points, eight rebounds, four steals and two assists.

But unfortunately, there just wasn’t enough support all-around to warrant a win that would break the team’s streak.

Coach Nick Nurse’s original gameplan was to ease VanVleet (along with others) back into play on a minutes restriction - but this plan fell apart when Toronto faced a close game against the Detroit Pistons in the star guard’s first game back - where he played 32 minutes in the team’s loss.

Since that defeat, VanVleet has played a team-high 41 minutes in each of the Raptors’ last three matchups against the Utah Jazz, Cleveland Cavaliers and Rockets. Across the total four-game stretch, he’s averaged 38.8 minutes per game.

"He is who he is, man. He's a super competitor," said Nurse of VanVleet following Monday’s game. "He's doing everything humanly possible to try to will us to a win. He just needs a little more help."

While a three-week break is bound to make any player a little rusty, VanVleet has still impressively notched over 20 points in two of the four gameswith an average of 5.5 assists and 2.8 steals per game.

"I'm gonna leave my heart on the floor every time I step out there," VanVleet shared following another tough loss for Toronto.

After being asked how he felt after playing so many minutes following his break, he said, "I feel like we've lost nine in a row, that's how I feel."

"My body is what it is," VanVleet continued. "I'll get my rest and my treatment and get ready for another one because the games aren't going to stop coming."

VanVleet will have just one day off to rest and regroup before facing the Denver Nuggetson Wednesday night.

While we don’t doubt his capabilities one bit, we can only hope he receives the level of support needed from his teammates to save the Raptors from a daunting 10th-consecutive loss.