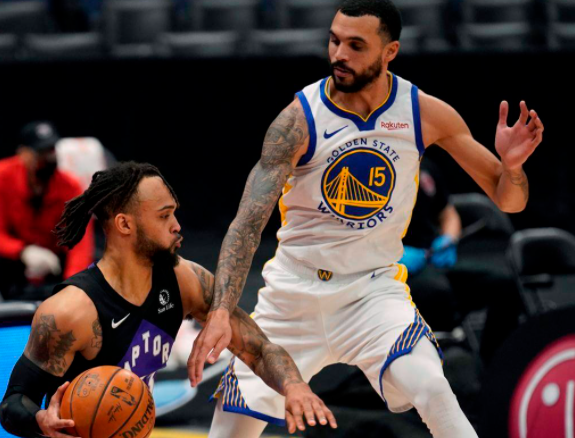 “We were due”, says coach Nick Nurse

After so many painful losses, the Toronto Raptors have come back with a vengeance and seem to be unstoppable yet again.

Following Friday night’s victorious 130-77 win against the Golden State Warriors, the largest margin win in the NBA this season, The Toronto Raptors did it again Monday night - this time against the Washington Wizards for a 103-101 win.

In Friday’s record-breaker, Pascal Siakam scored 36 points in three quarters (and it also happened to be his 27th birthday) - helping his team win for just the second time in 15 games.

"Losing is not fun, and anything that lifts us out of that is good," Siakam said following Friday’s game. "The hardest thing to do when you're losing is to stay together, and that's what we've been trying to do. Obviously, it's just one game and we've got to get some wins in a row."

Friday was the seventh loss in eight games for Golden State, who were playing without star members Steph Curry and Draymond Green.

Fast forward to Monday, and Toronto recovered from a 19-point second-half deficit to rout the Washington Wizards 103-101. This marked the Wizards’ fourth straight loss.

Toronto’s Gary Trent Jr. beat the buzzer with a long 3-pointer, and Siakam led the team in points with 22.

On the other hand, Russell Westbrook had 23 points, 14 rebounds and 11 assists for Washington - who were leading 101-100 when Siakam was called for a charge with just 27 seconds remaining. That’s when Trent got the rebound after Raul Neto missed a reverse layup with 5.5 seconds remaining.

"I almost called [a timeout] but I thought there's plenty of time to get it up there and get off a shot," said Raptors coach Nick Nurse. "There's lots of reasons not to take it, and we were fortunate this time. We were due."

With Fred VanVleet still struggling with a left hip injury, his time on the court has not been consistent. Raptor Malachi Flynn, who played 34 minutes off the bench with VanVleet injured, totalled 16 points, six rebounds, six assists and four steals.

"Fred's been iffy a couple times, but then he plays. But he told me to be ready," commented Flynn. "We've got a lot of players down, so I knew a lot would be on Siakam. I just try to make it easier for him and the other guys."

Now tonight (Tuesday), the Raptors will host the Los Angeles Lakers making this their first matchup this season.

Will they strike a third consecutive win? We’ll be watching.