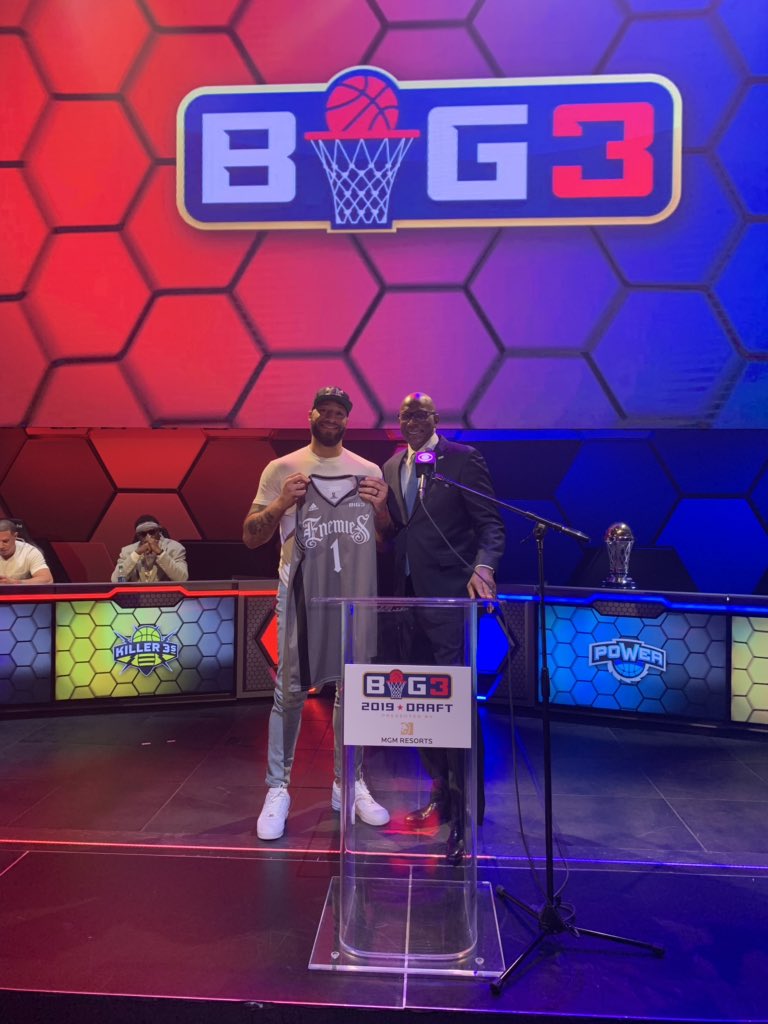 The calendar has flipped to May, one month away from June and the summer is here. So close to BIG3 basketball but first things first, the BIG3 Draft got going on the first day of May. 31 players were selected tonight. Guys who get to keep the dream of playing professional basketball alive. For those that weren’t selected, they’ll keep working hard with the hopes of being added to a roster this summer if need be.

The first overall pick to no surprise was Royce White and he’ll be apart of the Enemies. Royce is such a gifted athlete, everybody knows this and although things didn’t work out for the talented athlete in the NBA, the BIG3 aims to be a redemption story. Ice Cube let us know that Royce has been training for the BIG3 with some MMA! And SHEESH this team is LOADED. Gilbert Arenas, Perry Jones, Lamar Odom, Royce White, Craig Smith, and Frank Robinson. I spoke to Craig Smith about his expectations for the Enemies and he said, “Come out and win every game possible!” Well then, the Enemies are officially the team to beat in addition to Power.

Some other notable picks would include... Larry Sanders going 3rd to the 3 Headed Monsters. I LOVE this pick, Larry is going to thrive on the boards and provide great defense down low. Sanders surprised many when he just showed up to the combine, nobody really knew he was planning on participating in the league. Yakouba Diawara went 6th overall to Tri-State. I’m telling you right now, Yakouba is going to be a problem! He might be soft spoken, but his scoring is going to do all the talking for him. He’s going to get buckets on a really good Tri-State team. Greg Oden going 7th to the Aliens after not even participating in the combine! I like many of you will be rooting hard for Greg this summer, like Royce he has a chance to redeem himself and a short NBA career due to unfortunate injuries. Really hoping Greg balls out! Jamario Moon went 10th to Ghost Ballers to round out round one. I love the value that the Ghost Ballers got here, Jamario proved he could play in this league when he thrived for the 3 Headed Monsters last year, remember when he banked in a 4 point shot to win a game? Jason Richardson went 14th overall to Tri-State. Jason says he only has 10% left in his jump tank so hopefully we can see him throw down a slam dunk or two this summer! Alan Anderson then went 15th to the Triplets, a very good pickup by Lisa Leslie and her team. Alan was the Co-Captain for Killer 3’s and is going to help out the start-up Triplets in a plethora of areas. Dusan Bulut went 24th overall to the Ball Hogs and he’s a world renowned 3 on 3 player. It’s going to be very interesting to see how Dusan’s game translates from overseas to the BIG3. I asked Dusan a few questions after he was drafted. In response to being selected he stated that he was nervous all night but is very excited to be apart of this brotherhood and it’s really proud moment for him. He also hopes that his experience from 3 on 3 overseas will bode well for his new team, Dusan aims to implement a winning brand of basketball to the Ball Hogs.

One player that I’m just shocked wasn’t drafted is Xavier Silas. Xavier has experience playing in this league, balled out at the combine, and his experience in the league got him a spot with the Boston Celtics in 2018. Every player I spoke with after the combine mentioned Xavier and how impressive he was. To see him go undrafted is a shame and it’s only a matter of time before he’s back on a roster this summer.

I spoke with Rick Mahorn after the draft. Rick is coaching the Enemies after having coached Trilogy the last two years, winning the title in year one. Rick says his expectations are, “High, we have a fresh team with a lot of hungry guys that will help us out a lot. It’s important for me to get all my players in the right frame of mind.”