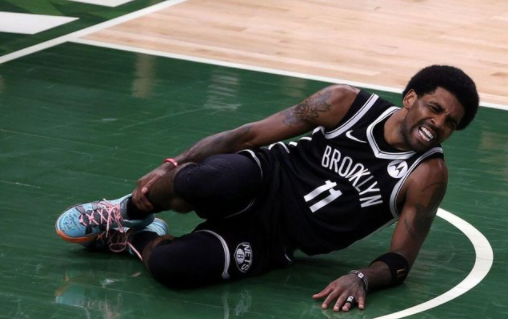 “It was a big adjustment tonight to play without him and James, but we've had that type of year"

The Milwaukee Bucks were able to even the series Sunday night with a 107-96 victory against the Brooklyn Nets.

Brooklyn’s Kyrie Irving was unfortunately unable to see the whole game through due to spraining his right ankle after making a layup midway through the second quarter, taking a hard land on Giannis Antetokounmpo’s foot.

Upon the landing, Irving’s foot bent dramatically, with the guard appearing to be in significant pain immediately after. Irving remained on the court for several minutes before getting back on his feet to walk to the visiting locker room, albeit with a limp. He left the building using a set of crutches and with his ankle in a walking boot, according to sources.

The Nets decided to rule out Irving for the remainder of the game just prior to the beginning of the second half. After the game, coach Steve Nash commented that the X-rays of Irving’s ankle were negative.

"I have no idea what is going to happen with [Irving] in the coming days," Nash said. "We will cross our fingers and hope that it is better than I don't know -- better than what -- better than missing the next game?

"We all have to pitch in. We all got to play together."

Antetokounmpo was interviewed by Nichols following the Bucks’ win, commenting that he wasn’t even aware of what Irving had injured during his initial drop to the floor.

"I thought he got hit in the groin at first. When I went back to the locker room, they said that he sprained his ankle. I wish him a quick recovery, and hopefully he can be ready for Game 5. Wish him nothing but the best, but we have to keep focusing on ourselves, keep focusing on the task at hand, keep having fun and try to win games."

"We missed [Irving], obviously," said Nash. "It was a big adjustment tonight to play without him and James, but we've had that type of year. So, we have to find a way to figure it out, to look at the tape and get better."

Prior to Sunday’s game, Nash told sources that Harden has been “progressing” and working though his rehabilitation, as well as doing on-court work including shooting.

With that being said, the coach still isn’t clear on what Harden can safely do at this time - so we don’t know yet if he’ll be returning for Game 5.

"I don't want James to be rushed back," Nash said. "If he's able to play next game, or the game after, that's fantastic. If he's not, we don't want to rush him back and jeopardize doing something worse or making this a long-term injury."

The Bucks and Nets go head-to-head again in Game 5 tomorrow (Tuesday) night, where speedy recoveries are certainly in order for the Brooklyn team.