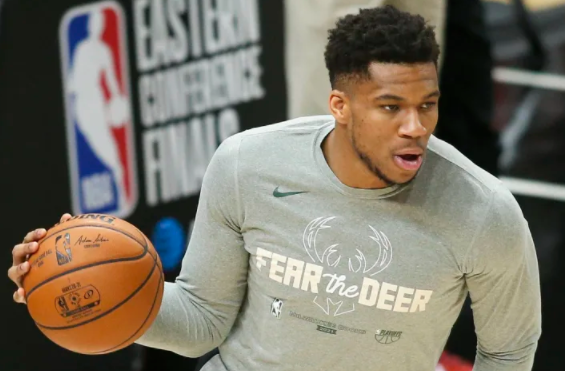 The Milwaukee Bucks’ Giannis Antetokounmpo has been listed as doubtful regarding Game 1 of the NBA Finals facing the Phoenix Suns on Tuesday, after missing the past two games due to a hyperextended left knee injury.

Antetokounmpo suffered the injury in Game 4 of the Eastern Conference finals vs. the Atlanta Hawks.

Bucks coach Mike Budenholzer commented earlier Monday that Antetokounmpo was able to do some individual on-court work separate from the team's afternoon practice. When asked aboutany specific exercises and movements Antetokounmpo could do without pain, Budenholzer decided not to answer.

The league announced that, due to Antetokounmpo's status being uncertain for Game 1, he was exempt from speaking to any reporters on Monday.

Following his knee injury in Game 4, Antetokounmpo was able to do some work on the court for the first time on Saturday. Prior to that, Budenholzer says that he had only been capable of doing exercises in the weight room.

During the final two games of the East finals, the Antetokounmpo-less Bucks still saw victories with the help of dominant performances by Khris Middleton, Jrue Holiday and Brook Lopez.

Middleton commented on the changed team dynamic with a missing Antetokounmpo.

"When Giannis is out there, a lot of times we can just give him the ball and let him go to work and let him orchestrate a lot of things out there," said Middleton. "Without him, we have to do it by committee."

Middleton scored a total of 64 points across both games, with Holiday adding a total of 60.

Holiday felt that it was his duty to step up and restore some of the offensive void with Antetokounmpo gone.

"[I'm trying to] just continue to be aggressive," said Holiday. "No letdowns, because the way Giannis [plays], there are no letdowns. He's continuously going to the basket, being aggressive on both ends of the floor.

“He does so much for this team that I just felt like losing that would be really hard for us."

Middleton has been a supportive teammate for Antetokounmpo through his healing journey; suggesting that he don’t hurry back until he knows he’s completely ready.

"[I told him] don't rush back in and put yourself at a greater risk for a greater injury," said Middleton. "He's a guy -- he puts so much time and effort into his body to be the best version of himself also."