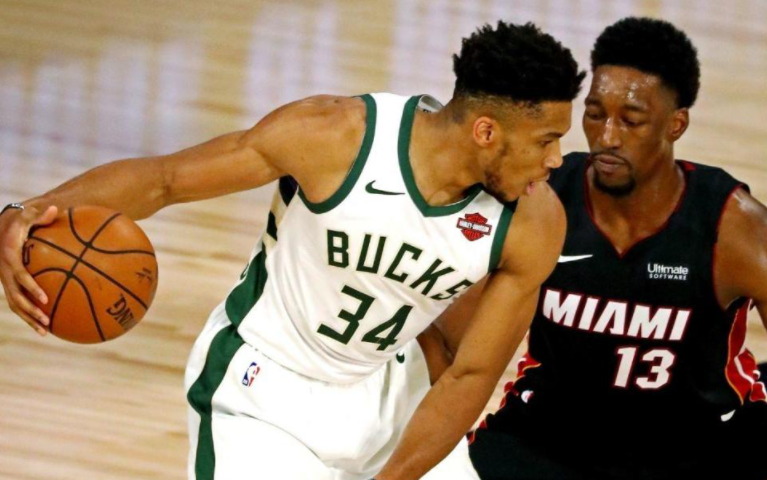 “We've got to stay locked in for game three”

The win was in great part due to the performances of Giannis Antetokounmpo, who scored 31 points to go along with 13 rebounds and six assists, and Bryn Forbes, who scored 22 and netted five times during the first half. Forbes had signed with Milwaukee back in November after four seasons with the San Antonio Spurs.

Furthermore, Khris Middleton had 17 points for the Buck and Pat Connaughton had 15 while making 5 of 9 baskets from beyond the arc.

Dewayne Dedmon led the Heat in both categories with his 19 points and nine rebounds, with Goran Dragic scoring 18 points and Bam Adebayo adding 16.

Three-point shooting was a theme of success for the Bucks as they scored 22 out of their 53 attempts.

In fact, the team took over the first quarter of the game with their 10 three-pointers to match an NBA record for most made in a quarter, and their 26-point lead matched the largest following the first quarter in NBA post-season history.

"After game one I didn't look at the stat sheet," said Antetokounmpo. "At the end of the day, a win is a win. All I care about is winning the game, putting my team-mates in a position to win a game.

"It feels good when guys are knocking down shots. We were seeing the ball go in, we were making stops, it felt good. We've got to stay locked in for game three."

Teammates Antetokounmpo and Forbes both pointed out that the Bucks' offensive outburst was due largely to their defense.

"Defense had something to do with it," explained Forbes. "We were getting big stops and pushing it in transition and just finding shots."

For the Heat, the loss highlighted their offensive shortcomings, with both Jimmy Butler and Bam Adebayo having less-than-ideal performances for the second straight game.

"The bright side is, I don't think we can play any worse," said Butler.
Miami will get another shot at defeating the Bucks in Miami on Thursday in Game 3.