Bucks Notch 120-100 Victory Over Suns on Sunday; Powerhouse Antetokounmpo is Back 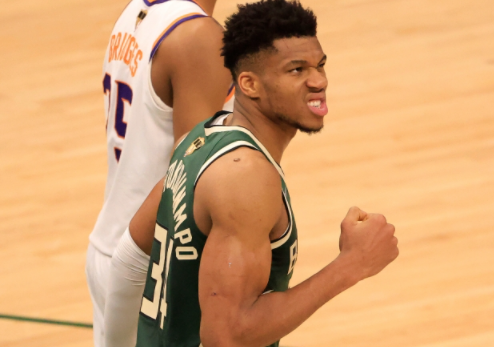 “It was definitely a team effort believing in ourselves”

The Milwaukee Bucks took down the Phoenix Suns 120-100 on Sunday night, with a previously injured Giannis Antetokounmpo back with game-winning performance like nothing had ever happened.

Antetokounmpo had missed the last two games of the Eastern Conference finals due to a hyperextended left knee - and nobody was too confident about when he’d be able to return.

But Sunday’s NBA Finals game saw the Greek Freak score an impressive 41 points along with 13 rebounds and six assists.

“We knew what kind of game this was going to be,” said Antetokounmpo. “We knew that if we lose the game you’re in the hole.”

Milwaukee center Bobby Portis, who contributed 11 points in 18 minutes, chimed in about Antetokounmpo’s famous nickname, and just how fitting it is. "I just think whoever gave him nickname the Greek Freak did a great job of that, for real," said Portis.

"It's different how he's playing out there and doing all these different things and just being himself. I'm saying, that's just rare."

The Suns’ Devin Booker, who scored just 10 points, was well aware of his team’s competition.

“I said it after last game. This team’s not going to give in. They’re going to keep playing all the way through,” said Booker. “So we have to bring that same effort that we had in the first two games and I think we’ll be in good shape.

The Bucks’ Jrue Holiday had a good bounce back from the last two games in Phoenix, making 5 3-pointers and 21 points. Khris Middleton also added 18 points.

"When [Giannis] rolling sometimes, like he was these last two games, you've just got to give him the ball, give him his space and allow him to go to work," said Middleton.

Holiday acknowledged the importance of the Bucks’ strong mentality as a team.

“It was definitely a team effort believing in ourselves, like Khris said, making the right plays, the easy early pass, and being able to go out there and have fun and play our game."

The next Bucks vs. Suns game is scheduled for Wednesday, July 14.