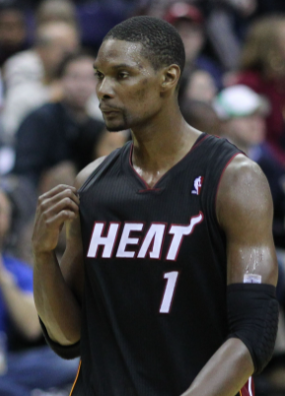 “I wanted to wait for the right moment”

Back in 2010 when Pat Riley recruited Chris Bosh to the Miami Heat, he pulled out his collection of championship rings and let Bosh keep one for himself. It was the 2006 championship ring that Riley had won as head coach for the Heat.

During Bosh’s Hall of Fame induction speech this past Saturday night, he shared this special moment in time with the audience.

"He took out this velvet bag full of championship rings and he dumped them all across the table," said Bosh of Riley.

"He picked one up, and he looked me dead in my eyes and he said, 'You give it back to me when we win one together. Now, when I think about it, it was crazy because I hadn't even agreed to sign with Miami.’"

Clearly there was some magic to Riley’s ring pact as Bosh went on to sign with Miami, with the two ultimately winning two championships together. However, Bosh hadn’t ever gotten around to returning the ring to Riley as per their agreement - but he withheld until Saturday night for a reason.

“We did win a ring together, two of them - but I never gave back the one he loaned me because for whatever reason I wanted to wait for the right moment. I figured this would be a good moment."

The audience cheered as that undeniably “right moment” was shared between Bosh and Riley on stage, with the 2006 championship ring finally returned to Riley.

Also in attendance at the 2021 Basketball Hall of Fame were three of Bosh’s former Heat teammates (LeBron James, Dwyane Wade and Ray Allen).

Needless to say, it all made for one memorable night for Bosh and the Heat.

Chris Bosh gives something back to Pat Riley. ?? pic.twitter.com/oVhf8Y6tJe