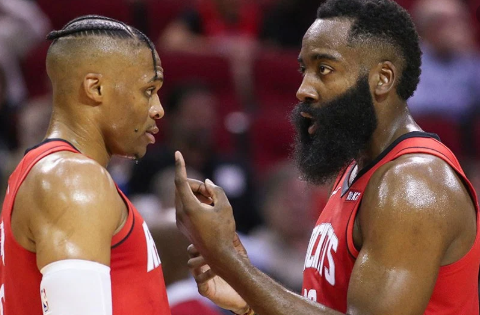 The Rockets dominated the Portland Trail Blazers 132-108 in Monday night’s game, with top point contributions coming from no other than James Harden and Russell Westbrook.

Doing more than justice to his 30+ point streak across 8 straight games, Harden brought 36 points, six rebounds and five assists to the Rockets, with Russell Westbrook bringing a personal season-high 28 points, 13 rebounds and 10 assists.

"I think that a lot of people try to normalize greatness when you see it over and over again, but it's not normal because there's nobody else that can do it," said Westbrook of teammate Harden after the game. "If it was normal, everybody would do it”.

In other good news for Houston, the team was re-joined Monday by previously injured players Clint Capela and Daniel House Jr., with Capela scoring a season-high 22 points with 20 rebounds.

“It’s good because that’s how we’re going to play,” Rockets coach Mike D’Antoni said of the players’ returns. “In the end, probably, if you can win, injuries help get everybody on pace. Now, we got to keep it going and get back the chemistry we had before.”

On the other hand, Portland’s CJ McCollum led his team with 25 points accompanied by a struggling Damian Lillard shooting only 4 of 15 to bring 13 points.

For the majority of the game, Houston remained considerably in the lead; their victory well-anticipated.

A small glimmer of hope did arise for the Trail Blazers when McCollum shot a 3-pointer in the third quarter with roughly 8 1/2 minutes remaining, bringing Houston’s lead down to 11 points (yet still in the double digits).

But that hope was lost when Harden added 6 points and P.J. Tucker added 5 with a 3-pointer with 2 1/2 minutes of the quarter remaining.

Fast forward to five minutes left in the game and Houston was leading by a hefty 18. Amidst all of this assurance, Harden shot a 3-pointer and Westbrook made his 10th assist to blast the Rockets even higher into one victorious win.

The Trail Blazers will have a shot at redemption as they face the New Orleans Pelicans tonight. The Rockets play again Wednesday against the Denver Nuggets.