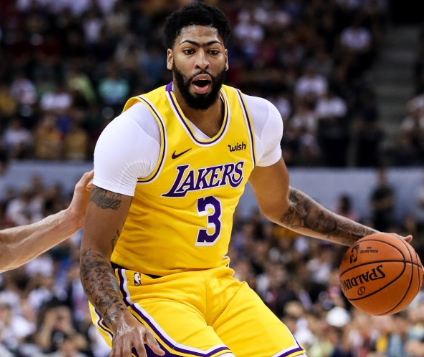 “I understand why they feel that way, but it's all love on my end.”

Wednesday night saw the Los Angeles Lakers beat the New Orleans Pelicans 114-110, in another game that showcased how truly magical the chemistry between Anthony Davis and King LeBron James can be.

But this was also a night where former Pelicans player Davis would return to New Orleans’ home grounds. (Need we bring up the massive public trade request buzz of last season?)

Davis did confirm that he hadn’t been expecting anything more than a hostile welcome. "I'm pretty sure every time I catch the ball, it's probably going to be boos and stuff like that," Davis told ESPN.

While The Brow may have experienced a continuation of vigorous boos from his former team’s crowd, that wasn’t going to stop him from scoring a season-high 41 points on 15-of-30 shooting. Aside from making baskets like nobody’s business, Davis also knows how to keep it cool and professional in the face of any negative attention.

”Obviously they're fans of the Pelicans. And I understand why they feel that way, but it's all love on my end."

Wednesday night also marked a point in history for Davis, as he became the first player in NBA history to make more than 40 points in the first matchup against a former team, according to ESPN Stats & Info.

James on the other hand scored 29 points, 15 of them in the final period, and forward Kyle Kuzma brought 9 of his 16 points to lift the Lakers out of their then deficit of 10 points.

"New Orleans fans should probably boo their own team for letting him get 40 and come back," Kuzma commented in support of his teammate. "I don't know what that was. But he was ready for this game. On the way to the arena on the bus he was rapping out loud and he never really does that so you could kinda tell that he was ready to play."

After witnessing Wednesday’s game, it seems a lot like Los Angeles is just where Davis belongs.

"I just wanted to get the win. It was a great game,” said Davis.

“We competed and I think from my perspective everybody in the world that's all they want. A game like that. Two good teams going at it. I won't say tension, but everybody wanted to see. It was fun for me. Had a great time but most importantly I was just glad we got the win."