Lakers to Be Conservative With James’ Return Following Ankle Injury 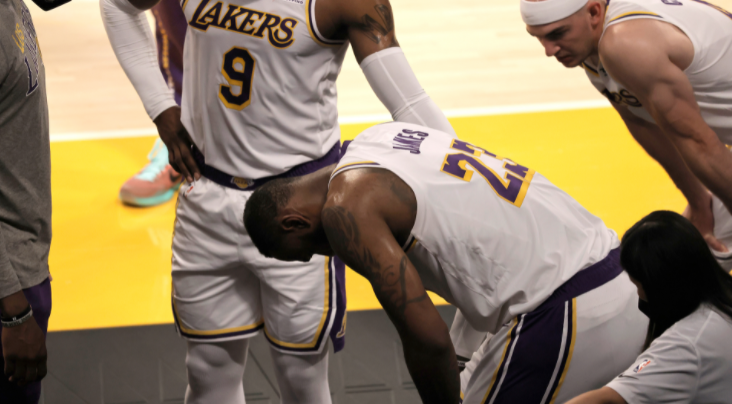 “We want him to get as much play with rhythm and timing without agitating the ankle as possible, and that’s a delicate balance”

Los Angeles Lakers forward LeBron James made a return to the Staples Centre on Sunday night - albeit not in his usual form.

James may have spent the Phoenix Suns matchup sitting courtside, but he was at least present after being absent for the last three games due to his problematic right ankle injury.

With that said, coach Frank Vogel did hint that it may be a while before the 36-year-old James makes his official return to the court.

“I think it really comes down to just evaluating where we’re at on a daily basis: where he’s at with how his ankle is feeling, and how his workouts are going, but also where the standings lie,” said Vogel. “Obviously if you get locked into seventh, maybe it does make some of those decisions easier and we’ll just focus on what’s best for his return to play program, so to speak.”

Regarding the Lakers making it to the sixth seed, Vogel went on to add that this prospect “looks unlikely”.

And while there’s still motivation to get James back and playing before the end of the regular season in just a week’s time - the matter isn’t nearly as pressing with the sixth seed looking doubtful.

“We want him to get as much play with rhythm and timing without agitating the ankle as possible, and that’s a delicate balance,” said Vogel. “But obviously it’s complicated if the games are must wins if you’re in that hunt for the sixth.”

Other injury updates include the Lakers’ Kyle Kuzma who was been out due to lower back tightness, to which Vogel said had occurred late during Friday’s game vs. the Trail Blazers. Kuzma had also commented postgame about his injury being “uncomfortable” through Sunday afternoon, appearing visibly distressed.

Furthermore, the Lakers are also hoping for a return of point guard Dennis Schröder for the final weekend of the regular season. Schröder has been out since May 2nd on an originally 10-to-14 day timeline due to the NBA’s COVID-19 protocols.

Vogel commented that Schröder has been “engaged” with the Lakers during this second instance of absence.

“And he’s limited, obviously, with what he can do from a conditioning standpoint but just trying to make the best of it.”