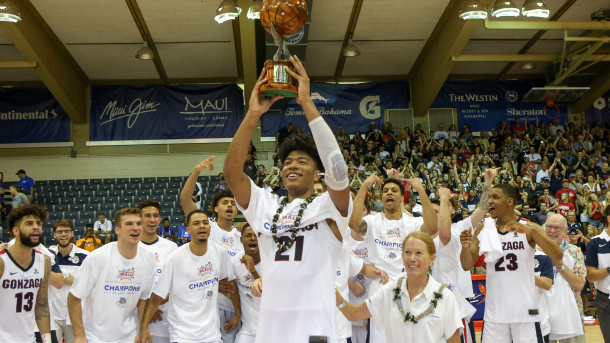 This has been a very intriguing start to the 2018-19 college basketball season. Many have pegged Duke as the national champion and I continue to disagree with those comments. Let’s take a look at what happened in the last week.

So many early season tournaments took place and the best one took place in Maui. We had a loaded bracket at the Maui invitational where Gonzaga took down Duke in the championship. After Duke held off Auburn they were unable to contend with Gonzaga. The reasons being, Duke is just such a young team, they’ve coasted to every win thus far, this was an unusual situation for their team. On the other side, Gonzaga is an older team with tons of experience and retains players from the team that lost to UNC in the 2016 National Championship. Gonzaga led wire to wire and walked away with a 89-87 win behind Rui Hachimura’s 20 points, 7 rebounds, and 5 assists. The Japanese native is an amazing player and is so fun to watch. Also keep in mind that Gonzaga is without Killian Tillie, arguably their best player. The #1 team in the nation is Gonzaga, you can’t convince me otherwise.

In the Las Vegas Invitational, Michigan State defeated UCLA and Texas to win the championship. Cassius Winston led the way with 19 points and 7 assists against UCLA. Then he scored 20 points and 10 assists against Texas to take home MVP honors. They beat UCLA 87-67 and Texas 78-68. In the game against Texas they trailed 25-6 early. It was an impressive performance to come back and win by double digits. Despite losing, Texas impressed me a ton. These guys led UNC from tip to finish, winning 92-89. I am not a big fan of the Texas offense, for them to score 92 on UNC and shoot 52.5% from the field is crazy. Kerwin Roach balled out with 32 points on 12-15 shooting vs the Tar Heels. He added 7 assists and 6 rebounds as well as a nasty poster dunk. https://twitter.com/Blutman27/status/1065789504336752641

Kansas and Tennessee played an incredible game in the NIT Season Tip-Off. KU defeated Marquette and Tennessee took down Louisville to advance to this championship. KU won 87-81 in overtime despite their best defender, Udoka Azubuike fouling out and only playing 17 minutes. Dedric Lawson put together 24 points and 13 rebounds along with 5 assists to propel KU. LaGerald Vick continued his hot streak as he scored 15 points. Things were rough for Tennessee when Grant Williams who scored 18, fouled out. But Admiral Schofield was excellent, scoring 21 and snagging 6 rebounds.

Credit to Villanova for bouncing back in a big way. They won the Advocare Invitational with wins over Canisius, Oklahoma State, and Florida State. It was a complete team effort as everybody who played pitched in. The win over FSU was a close one, 66-60 for the Wildcats. They were able to lock in on defense and shut down MJ Walker. MJ only scored 2 points in 31 minutes. They also forced 16 turnovers. Jahvon Quinerly didn’t see action in this game, showing Jay Wright is willing to wait for Jahvon to be 110% ready to play basketball at this level before he continues to get critical minutes.

There were plenty of other great performances, games, and champions, but I can’t get around to all of them. Shoutout to all the teams that won a tournament this week, that’ll bring huge momentum for your team.