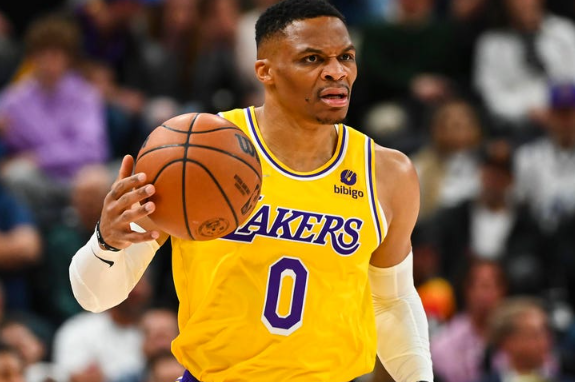 Westbrook has zero doubts in his ability to do whatever it takes to help the Lakers win.

When Russell Westbrook was asked about whether he felt wanted by the Los Angeles Lakers, his response was anything but apprehensive.

"I don't need to," the 33-year-old Westbrook recently told ESPN.

"I need to just do my job. Whether I'm wanted or not doesn't really matter. I think the most important thing is that I show up for work and I do the job like I've always done it: Be professional and go out and play my ass off and compete."

Westbrook is now in his second season with the Lakers, but there are many uncertainties at stake. The nine-time NBA All-Star has no assurance he’ll be a starter, or even remain a Laker.

Despite understanding all of this, Westbrook appeared cool, calm and collected inside the conference room, even sporting a smile.

Westbrook had spoken of returning to the gym sooner in the past offseason compared to any other point in his career, and had been speaking with Lakers coach Darvin Ham regarding a "connection" and "trust" with Ham's vision to employ him in a way that would lead to success for the Los Angeles team.

That could be as a starter, or could even be off the bench. We just don’t know yet - but Westbrook is ready for any outcome.

"I'm all-in on whatever it takes for this team to win," said Westbrook. "I'm prepared for whatever comes my way."

Furthermore, Westbrook had spoken about his talks with teammates LeBron James and Anthony Davis regarding how they had played just 21 games together a season ago, and that he can still envision what’s possible.

"There's so much optimism on how we can be great, how AD, LeBron, myself -- can be unstoppable in my opinion," said Westbrook.

When asked about whether he needed to fight to keep his confidence intact, Westbrook assured sources that had never been the case.

"I had to fight my response on how it affects the people close to me. To me, that was the important part,” Westbrook shared.

“Confidence is not something I lack. Yes, there were times last season that I wanted to play better -- that I should've played better -- but my confidence never wavers. Having bad games is part of the NBA, and I understand that.

"The only thing it affected for me was the impact that it had on the people closest to me -- my mom, dad, wife, brother, close friends. We've never had to deal with that as a family. That was the most difficult thing -- being booed in the arena and having my kids there.

"I'd look over at my wife, my parents, and try to get them to know that it's OK. Having played so long in the league, I'm more accustomed to it. But with COVID, the bubble, they had only been able to see a few games in the last two years. So [last] year, it's super exciting and then it's like, 'Oh s---. This is no fun for me.' ...

"Being able to play at home, that became a dream come true. But honestly, I didn't look forward to it as much for me as I did all the people who I grew up with, people in the community. ... But it wasn't exactly how I planned it all to be [last year]."