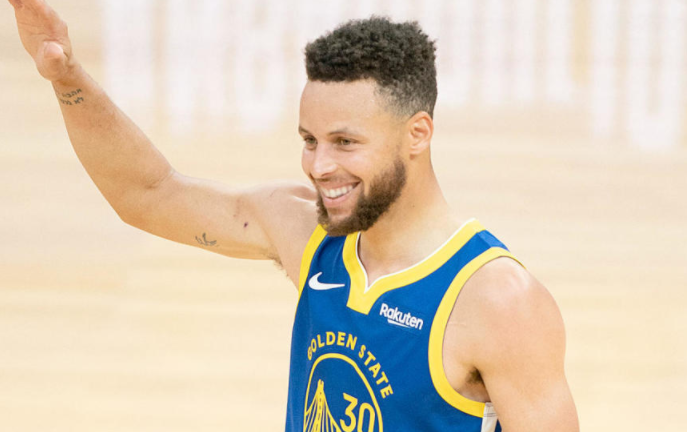 "The best part about what we get to do is you don't focus on results, you focus on the process”

In Sunday’s 117-113 win game against the Sacramento Kings, Curry broke the franchise record for most three-pointers made in a month.

In the Warriors’ 13 games so far in April, Curry has scored 30 or more points 12 times (with a 38.2 average this April), and has marked four games with at least ten 3-pointers.

Sunday’s game saw Curry finish with an awe-inspiring 37 points and seven 3-pointers - bringing his total to a whopping 85 with just two games remaining in the month.

The previous record of 82 was held by James Harden in November of 2019 when he played for the Houston Rockets.

When asked about what was going through his head during this kind of shooting streak, Curry answered: "When you're in this type of rhythm, nothing.""

"It's the best way to explain it," he continued. "It's just trying to get a decent look, get your feet underneath you, and then the rest is muscle memory, confidence and just creativity, so just trying to be in the moment as much as possible.

Most of the game’s nine ties and lead changes occurred in the second half, with Golden State’s victory decided in the final seconds by a stupendous Steph in action.

This pushed the team’s record to 31-30 this season as they head toward a potential play-off spot in the Western Conference.

"I'm just going to stop trying. I'll ask you to go back three or four games ago, look at my comments then and use those tonight again. ... I don't know what else to say. The shot-making is just unbelievable and mind-boggling, but I've used those phrases already. But I know you got to keep asking -- as long as he keeps playing like that, you got to keep asking, I got to keep answering."

With Curry currently on a “world’s-best-shooter” high, he won’t be letting it distract him from working hard and keeping the right mindset.

"The best part about what we get to do is you don't focus on results, you focus on the process," said Curry. "And that, for me, is how this happens. And it doesn't make me get bigheaded and thinking I'm the world's greatest in terms of I can't get better.

“But it makes me fall in love with the process even more and keep doubling down on what goes into trying to perfect your craft and put the work in and find new ways to get better.”

Following a day off, the Warriors will host the Dallas Mavericks on Tuesday - where Curry could push his 3-pointers record even further.