Warriors Get Even with Raptors; Claiming 109-104 Victory in Game 2 of NBA Finals 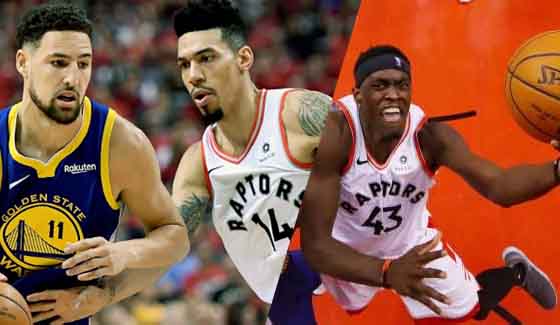 “Tonight was a different story because of our defense, and everybody contributed to that.”

What started off as a seemingly unpromising Game 2 for Golden State ended in a triumphant win.

With Stephen Curry struggling to deliver up to his usual standards at the game’s start and missing his first six shooting attempts; key player Kevin Durant out with a leg injury; center DeMarcus Cousins with two early fouls; and a number of other team issues — it appeared that the Raptors would have yet  another game in the bucket and take on a 2-0 series lead.

But for Golden State, an unexpected comeback was in order.

Let’s start with five-time all-star Klay Thompson, who brought a team-high 25 points along with some truly intense defensive power on Toronto’s Kawhi Leonard to keep them from scoring a field goal for nearly 7 minutes.

Then we’ve got DeMarcus Cousins, who just returned after being out with a torn quad for a lengthy 6 ½ weeks, who delivered 11 points and 10 rebounds in just 27 minutes.

“Once they told me I had a chance, a slight chance, of being able to return, it basically was up to me and the work and the time I put in behind the injury, it was up to me,” Cousins told sources after the game Sunday. “So I put the work in and the time in and with God's grace I'm able to be out here and play the game that I love. … We need three more wins and we need it to keep going, but that's a part of who we are in our DNA, it's not just what we say.”

“He was great,” Coach Steve Kerr, who reached his 76th playoff victory with this game, said of Cousins.

“We came in thinking maybe he can play 20 minutes. We needed everything he gave out there. His rebounding, toughness, physical presence, getting the ball in the paint — we needed all of that.”

Furthermore, Andre Iguodala really stepped it up after half-time; bringing all of his 8 points and shooting a 3-pointer with just 5.9 seconds left to really drive the Warriors’ win home.

“I think he sensed that we needed his production in that second half, and he came alive,” Kerr said of Iguodala.

And finally, despite a weak start and just not feeling “right”, Curry was able to finish with 23 points along with valuable contributions from teammates DeMarcus, Quinn Cook and Andrew Bogut. “At the end of the day nothing's going to keep you out from playing in the Finals game, if you can help it,” said Curry.

“We established our defensive presence, we got stops and everybody got involved in the offensive end. …  So obviously third quarters have been great for us. Game 1 couldn't get over the hump, but tonight was a different story because of our defense, and everybody contributed to that.”

In Game 2, Curry had also surpassed LeBron James for the most three-point attempts in NBA playoff history with his fourth attempt of the night.

On the other hand, Toronto’s Kawhi Leonard led the Raptors with 34 points; even setting the record for most free throws made without a miss during an NBA Finals game with his 16-of-16. But there were just too many total missed attempts and foul issues in the second half for Toronto to prevail.

“I feel like our pace was good early, it was just that third quarter, I feel like it just really killed us. 18-0 run, if we can't score no baskets, you're not going to win no game”, said Leonard in the Raptors Postgame.

“Finals is not going to be easy. The only thing that matters is the four. Four wins. Once you get it,

two wins, three wins, it does not matter. Just take one game at a time and just play through the adversity.”

To make matters worse, Kyle Lowry was struggling with some foul trouble that eventually took him out of the game. With Lowry being one of Toronto’s best, this is something the Raptors will need to ensure doesn’t continue.

As far as a new approach goes for Game 3, Coach Nurse will need to spend some time studying the team’s mistakes to help ensure they don’t happen again. “Taking care of the ball and scoring it [is really important] because if you don’t, they’re coming at you really fast the other way,” said Nurse.

“I’m going to have to re-watch that [third-quarter run]. I’m probably not going to enjoy that very much.”