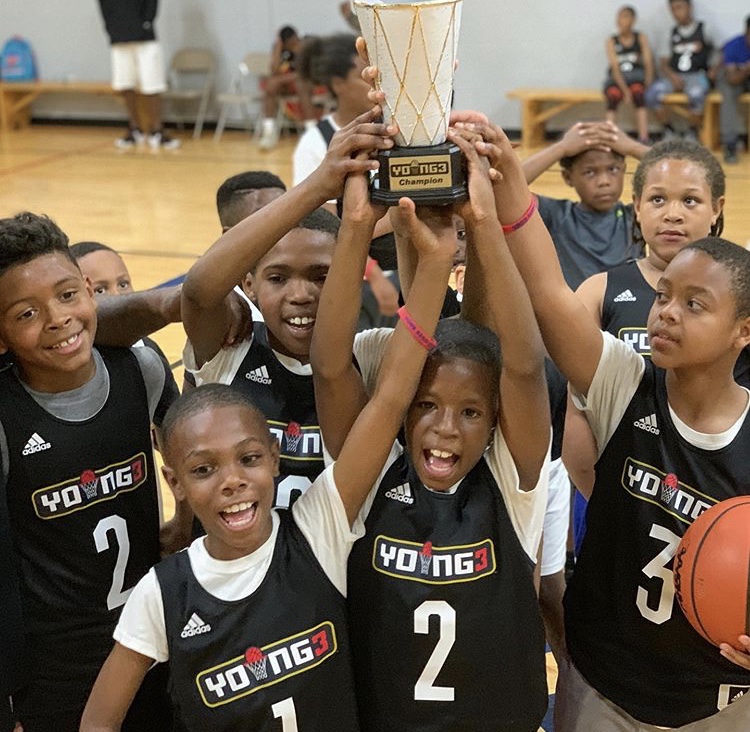 Alas, the Young3 is back on the summer circuit, traveling from city to city, blessing the youth through the wonderful game of basketball. Myself and the rest of the Young3 staff is super excited to get back at it and for our first week we went to the Lloyd H. Diehl Boys & Girls Club in Detroit, Michigan. There was a great turn out, about 125 kids showed up and what really gave us great joy was that we even saw many familiar faces that attended last years Detroit camp. Such a feeling of accomplishment to see so many people return to our camp less than a year later. It's truly amazing and really depicts how parents and kids view the camp as an unique experience that can’t be found anywhere else. Jerome Williams, Young3 president shared a few words with us. He was excited to say, “It was great coming back to the city of Detroit where my basketball career started in 1996.  Adidas and the Boys and Girls Club are great partners to aid our mission for serving the youth. I was also happy to see some new and old fans that are still barking in my DoggPound.”

The members of your Young3 staff this week were: Coach Jerome Williams, Johnnie Williams, Coach Joshua Williams, Coach James “Hollywood” Robinson, Coach Erin Thorn, Coach Desmond Farmer, Coach Charles “Choo” Smith, Coach Eric “Broadway” Jones, Bryan Burrell, Liam Blutman, and Lamar Lundy. Each coach was introduced with a signature song, smoke emerging from the locker room, and a short summary of their career. Patrice, the director of the Boys and Lloyd H. Diehl Girls Club stated that, “The Young3 Staff did a wonderful job of making kids feel good.” Detroit Chapter, NBRPA also helped the Young3 give back in Detroit.  Chapter President, Earl Higgins and Vice President, Willie Norwood were hanging out in the new, Legends Lounge! We will continue encourage the youth to ask life and basketball questions to NBA Legends over the course of this summer! We truly can’t wait to see how this progress over the next few months.

Next the coaches and campers went through stretches before getting into the drills. After about an hour of prep we moved on to a new component of the camp... the Toyota RAV4 4-Point Contest. What fun as each kid took a turn taking their shot from 4. After lots and lots of shots that included swishes, banks, airballs, and around the world rim rollers, we were down to the final two in both age groups, 12u and 14u. The 12u final was super chaotic and after many close attempts we finally crowned a champion. I must point out that the atmosphere during this event was absolutely nuts. The campers had formed a lane from the 4-point line to the basket with each super excited for every shot that was put up. When that winning shot was buried every kid stormed the winner and immediately formed a dog pile. Truly so much fun for everyone.

After that we moved on to the 3 on 3 tournament. There were three tournaments in all and they were as follows: 10u, 12u, 14u. Bates Fundamentals dominated the day as they won the 10u, 12u, and 14u tournaments. That would be a clean sweep so congrats Bates Fundamentals! Needless to say we were all blown away by the talent at today’s camp, especially from a big man on the 14u Bates Fundamentals squad. This youngster was years ahead of where centers his age are. His instincts were off the charts, he was an aggressive rebounder, fearless attacker, even knowing the plays he’d make before he got the ball and if that wasn’t enough he was a smart shot blocker. Man this kid was the best player we’ve seen at a Young3 camp. This kid was unreal for a big man his age, his future is bright.

This was truly an awesome day for all of us and the kids at the Young3 camp and if it’s any sign of what’s to come this summer is going to be special. Hope y’all check out a Young3 camp with us when we come to your city!