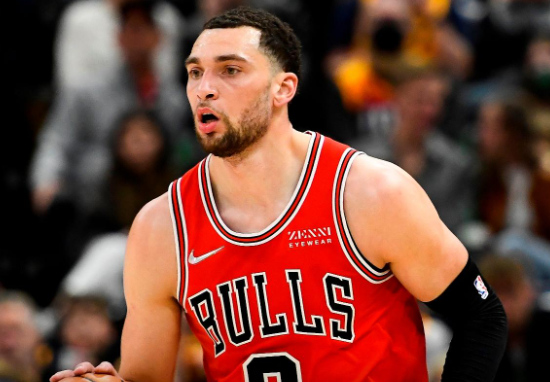 LaVine says that, had he met with any of the other teams during free agency, it would have been ‘disrespectful’ as they gave him “everything [he] asked for.”

While Zach LaVine may have gone into the NBA free agency with an “open mind” this summer, staying with the Chicago Bulls was a no-brainer - especially after being offered a five-year max contract extension that included a player option for the fifth season.

The five-year contract is worth $215 million, and is the largest deal in franchise history.

“Being able to come back as a cornerstone piece and allowing them to get some of my insights, some of my input in constructing the roster to help me and help us win, was really big for me."

The 27-year old shooting guard believed that he had outplayed his former contract, a four-year, $78 million deal that he signed in 2018 - as he grew and flourished into a two-time All-Star during that period.

So, the Bulls rightfully gave LaVine a deal that respected him in return - and exceeding what any other team could have proffered.

"I went into the offseason with an open mind. I laid out my goals, just like I always have," said LaVine. "Once I was able to meet with [general manager Marc Eversley and Bulls VP of basketball operations Arturas Karnisovas] and they came to me with everything that I wanted, there was no other reason for me to go outside and look at any other teams.

"I think that would've been, for me, disrespectful on my end because they gave me everything that I asked for. Everything on the table that I looked at had Chicago as all the pros. I did my due diligence on my own time as well and looked at things and made a decision for me and my family. But my heart was in Chicago."

LaVine, who averaged 24.4 points, 4.6 rebounds and 4.5 assists in 67 games last season, will be entering into his sixth season with the team after joining on as one of the centerpieces involved in the Bulls->Timberwolves Jimmy Butler trade.

LaVine has become an undeniably and increasingly valued player during his time in Chicago, most recently playing alongside other greats like Nikola Vucevic, DeMar DeRozan and Lonzo Ball - and helping the Bulls to make the playoffs last season for the first time since 2017.

"This is just something that is a token of respect, them viewing me as the type of player that I've been for the last four years and continue to see in the future what I can bring to the table," said LaVine. "I'm happy, I'm excited and working with me to bring me back, it was great.

"Individually, [I want] to keep pushing myself to reach higher and higher things; if it isn't All-NBAs, if it isn't MVPs, team-wise, it's win a championship. I think there's nothing above that. You've heard me say individual things come with winning, and the better and better we get as a team and I keep (pushing) myself to get better as a player, I think those things can match up.”